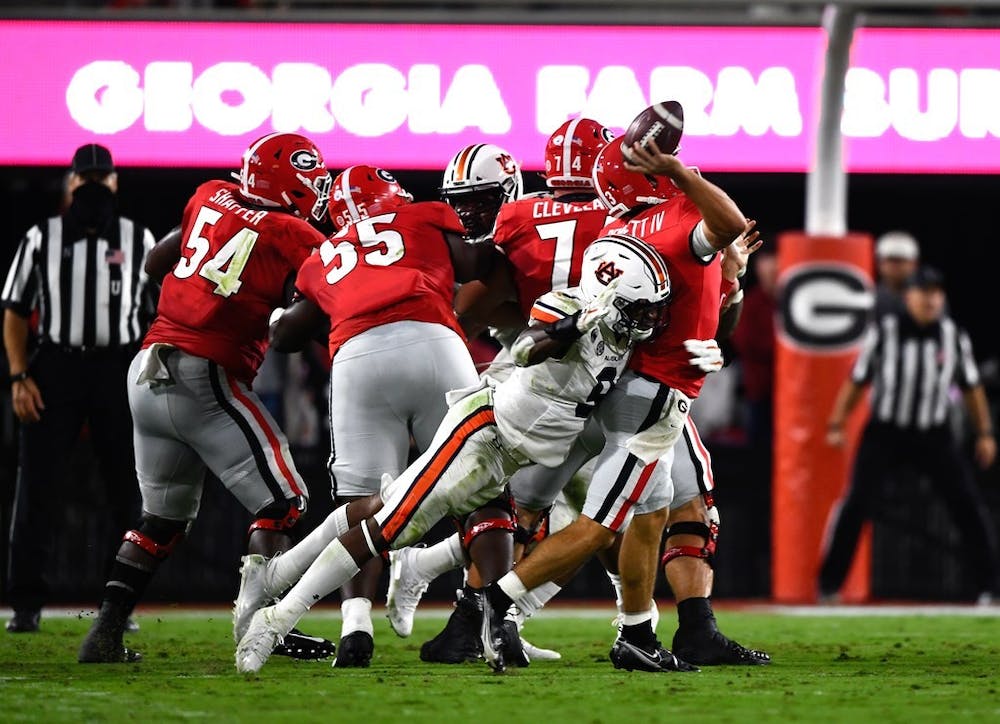 Auburn, AL (EETV)- Auburn lost their 15th straight game in Athens by a final score of 27-6. Georgia was the better team from the beginning as quarterback Stetson Bennett showed why he should be the starter for his team.

The Bulldogs dominated the line of scrimmage on both sides of the ball. Auburn's offense was held to 39 rushing yards by the stingy Georgia defense who made things difficult for the offensive line.

Head coach Gus Malzhan after the game, "First of all, give Georgia credit. A very good football team. They won the line of scrimmage. We really got whipped on all three phases, we got out coached.”

The Bulldogs put the game away in the first half as they scored 24 unanswered points. Running back Zamir White had two rushing touchdowns and Bennett would throw one to his top reciever George Pickens.

Despite a few positive drives from the Tigers in the second half, Auburn would fall in yet another disappointing game on the road. Here are three takeaways from Saturday's game.

It was a bad night for the Auburn offense who found their groove in the fourth quarter last week against Kentucky. After Saturday's loss, it looks as if the Tigers haven't fixed the same problems they had in road games last season.

Georgia's pressure on quarterback Bo Nix was unrelenting as he had to get out of the pocket multiple times to throw a pass. The offensive line was outmatched by the the power and speed of the Georgia defense.

Auburn's offense became one-dimensional because Georgia was able to handle Auburn's rushing game effectively. The spaces were not opening up for the running backs which put Auburn in passing situations.

Nix threw for 177 yards and one interception. His decision making was questionable at times as he seemed uncomfortable in the pocket. Georgia rattled him with several blitzes which forced him to make errant throws.

"I mean it is tough," Nix said, "Georgia is a really good team. We knew they were going to be a good team coming into the game. We knew we were going to have to play really well. Georgia played just as good as they could play. We played as bad as we could have played. It showed on the field. We just got beat."

This was a huge setback for the offense which continues to have problems moving the ball. They cannot rely only on the passing game to come through when they need it. Auburn's offensive line will have to do improve so they can give Nix more time in the pocket and open up holes in the running game.

Georgia's offense improved tremedously this week after a slow start against Arkansas in week one. The Bulldogs had 442 total yard of offense with over half of those yards comming through the air.

Stetson Bennett, a walk-on in 2017, threw for 240 yards and one touchdown as he carved up the Auburn secondary all night long. Georgia did a good job of creating space for the recievers especially on short to medium passes.

The running game was effective for the Bulldogs as they averaged seven yards a carry on each run. Zamir white led the way with 88 yards and two touchdowns.

“You have to give them credit," Malzhan said, "they got after us up front. They averaged seven yards on first down and we averaged two."

The Tigers had a huge loss early in the first half as Smoke Monday was ejected from the game for a targeting call during a punt return. They already had freshman Jaylin Simpson for the game which made the Auburn secondary depleted.

Cornerback Jamien Sherwood said, ""Coming here, we knew we were short on cornerbacks, so it was next man up at that point. We could have made the adjustments that we needed to but then when [Smoke Monday] goes down, who is my right hand man out there, and we lose him when we are down already, that really hurts us. We always play with a next- man up, but losing Smoke really hurt."

Although the Tigers were short inn the secondary, they cannot be happy by the way they defended the passing game from Georgia. This has seemed to be an issue as they have now given up 479 passing yards in the last two games.

One positive for Auburn's defense was that they allowed only three points in the second half. They do a great job of making adjustments but they need to have better starts to the game. This young defense will continue to grow this year but they will need to fix the problems in pass coverage.

Freshman running back Tank Bigsby got the start for Auburn as starting running back Shaun Shivers did not start due to an injury. Bigsby's size and strength were a bright spot for his future at Auburn.

Bigsby was a highly recruited running back from Callaway High School in Georgia and chose Auburn over several SEC schools. Bigsby made seven receptions for 68 yards and rushed for 31 yards on the ground.

Although he didn't put up huge numbers, Bigsby could be a guy that Auburn turns to in order to fix the rushing woes. Depending on how long Shaun Shivers is banged up, Bigsby might find himself as the starter in the future.

Auburn will return to Jordan-Hare Stadium on October 10th to face the Arkansas Razorbacks who are coming off their first SEC win in 20 games over the Mississippi State Bulldogs.

Auburn will face former Florida quarterback Felipe Franks who transferred to the Razorbacks after losing the starting job to Kyle Trask. The Tigers will have a chance to get back on track after a poor showing in Athens.

Kickoff for the Arkansas game will be at 3:00pm with TV coverage on SEC Network.