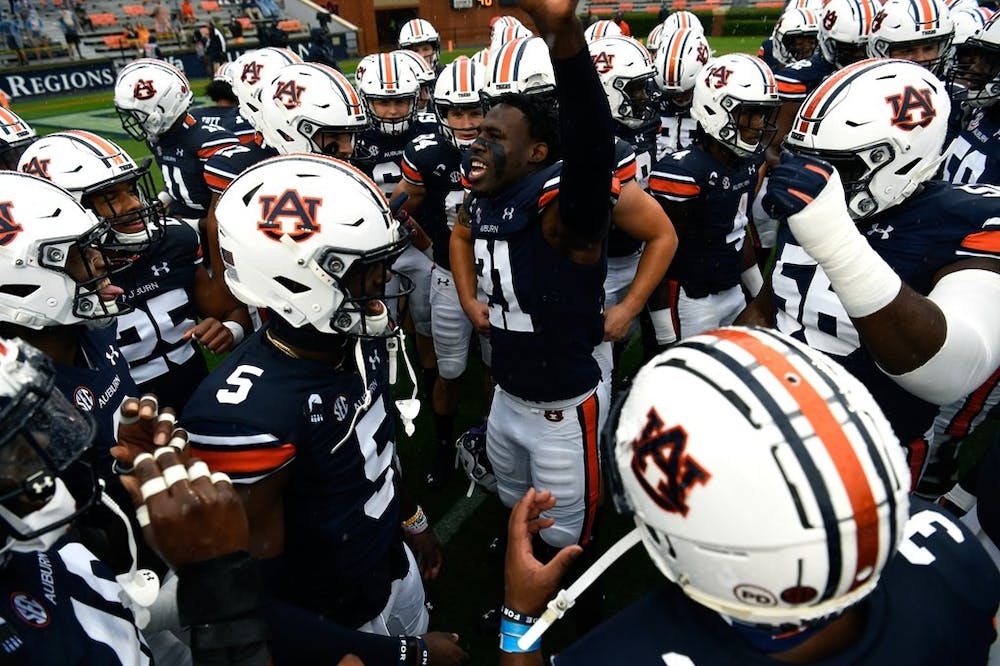 Auburn, AL (EETV)- Auburn escaped an upset bid from Arkansas with a 30-28 victory in week three of the SEC season. Saturday's game was affected by the outer bands of Hurricane Delta which brought rain for a majority of the first half.

Auburn scored 17 unanswered points in the first half. The Razorbacks put together two touchdown drives to get within five points but Auburn would add a field goal before halftime to lead 20-12.

Trailing 27-18 in the second half, Arkansas would score 10 unanswered points to take a 28-27 lead with just over five minutes to play.

Auburn's next drive ended with a missed field goal by Anders Carlson, giving Arkansas a chance to run the clock out by getting a first down. The Tigers would get a stop on defense which gave the offense one more opportunity to win the game.

The offense marched down the field to get themselves within field goal range. With the clock winding down, quarterback Bo Nix fumbled a snap on third down and spiked the ball behind him.

The officials blew the play dead before a clear recovery was made by Arkansas. The play would not be overturned and Auburn would have a chance to win the game with a field goal.

Anders Carlson stepped onto the field and hit a 39 yard field goal with seven seconds left to help Auburn escape an upset from the Hogs. In a day full of chaos around college football, Auburn will be glad to have escaped with a win. Here are the takeaways from Saturday's game.

Auburn's rushing attack put up 259 yards rushing after having only 39 yards rushing against Georgia in week two. Tank Bigsby had a excellent day rushing for 146 yards. 106 of those yards came in the first half which has not been done by an Auburn player since Kerryon Johnson against Ole Miss in 2017.

Bigsby put together 268 all purpose yards which as he showed people how just how good he is. Auburn head coach Gus Malzahn spoke about his performance saying, "He broke tackles, he ran extremely hard. It was hard yards, and he did a great job of protecting the football."

D.J Williams had a good day with eight carries and 71 yards rushing. Nix added 41 yards on the ground including one rushing touchdown.

Overall Auburn's running game was a good sign of things to come for the offense. They will need this type of performance against a physical South Carolina defense next Saturday.

Auburn's Defense Showed Resilence After Giving Up the Lead

Auburn's defense came into this game with several key injuries including Big Kat Bryant, K.J Britt, and Jaylin Simpson. They would not be involved in Saturday's game which allowed several young players to start on defense.

Auburn's defense started out well getting two sacks on the Razorbacks first two drives of the game. Jordyn Peters would block his fourth punt of his career and Barton Lester would recover in the end zone for a touchdown.

Arkansas quarterback Felipe Franks was efficient through the air with 318 yards passing and 4 touchdowns. Auburn has given up 749 yards passing in three games which could be a concern when they face teams like Alabama and Ole Miss.

Defensive coordinator Kevin Steele usually does a good job of adjusting in the second half but he couldn't seem to find answers to the passing game of Arkansas. Franks would throw two touchdown passes in the second half to take their first lead of the game.

Although there were cracks in the defense, they held the Razorbacks on. the last two drives to preserve the victory. With all the injuries, they will be glad to have escaped with the win.

"It's extremely tough," Malzahn said, "Our guys found a way to win and fought for sixty minutes. That shows the character of this team and it's something we can build upon."

Auburn's bend but don't break defense will have to clean up the pass coverage next week against South Carolina. Injuries were a factor but they should be getting a few starters back next week.

Auburn Got Saved By the Officials

Just before Anders Carlson hit the game winning field goal, Auburn faced a third down with the clock running. Bo Nix would try to stop the clock by spiking the ball. As he took the snap, he dropped it and then picked it up and spiked the ball backwards.

Both teams seemed to stop but Arkansas players would chase after the ball and recover it after the whistle was blown. Arkansas head coach Sam Pittman came out on the field arguing that it should have been ruled a fumble.

Officials would review the play and determine that the call should stand because the whistle had been blown before a clear recovery was made by either team.

By rule, the officials should have called that a fumble because Nix threw it behind himself which is considered a backwards pass. Arkansas recovered it and it should have been their ball.

Auburn was extremely fourtunate to win after that call. The SEC released a statement about the call saying, "During the replay review, there was conclusive evidence that the pass was backwards. However the recovery was not made in the immediate continuing football action, the ruling on the field was determined to stand under Rule 12-3-2-e-1."

Statement on play at :30 to go in fourth quarter of Arkansas-Auburn game. pic.twitter.com/L1UQRlFx2M

What's Ahead for Auburn

Auburn will face South Carolina in Columbia next Saturday. The Gamecocks are coming off a win over Vanderbilt but have also dropped games to Tennessee and Florida.

South Carolina is very physical and will provide the Tigers with another test on both sides of the ball. Kickoff will be at 11am with TV coverage on ESPN.