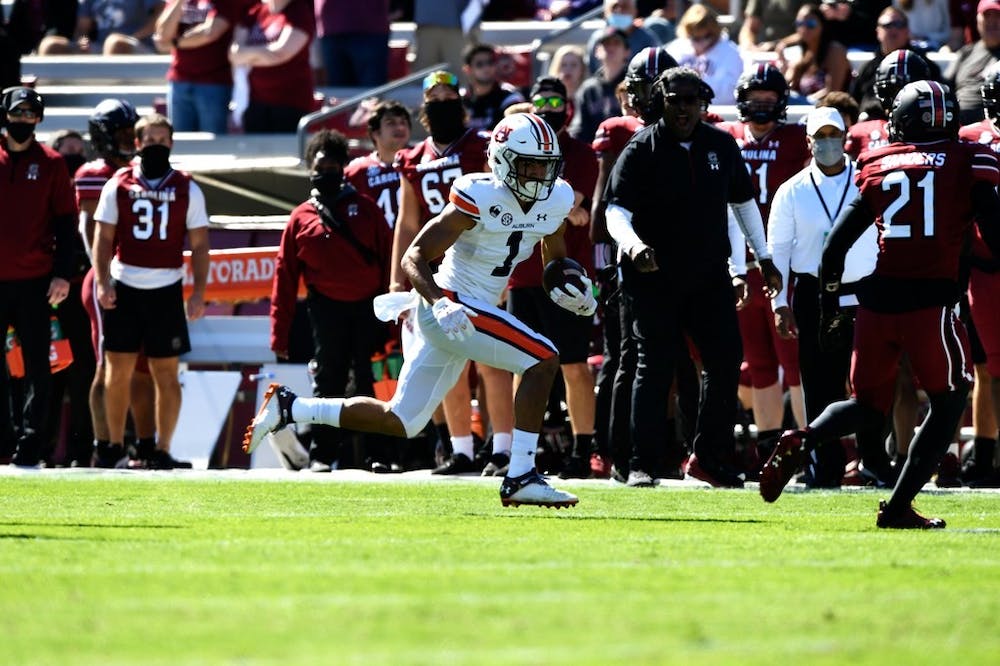 Oct 3, 2020; Columbia, SC, USA; Anthony Schwartz (1) runs the ball for for the first down during the game between Auburn and South Carolina at Williams-Brice Stadium. Mandatory Credit: Todd Van Emst/AU Athletics

Columbia, SC (EETV)- Another poor performance on the road cost Auburn as they fell 30-22 at South Carolina. Turnovers and penalties on offense plagued the Tigers as they had three turnovers and 89 yards in penalties.

South Carolina gained their first lead with 3:25 left the third quarter after Collin Hill threw his first touchdown pass of the game to Shi Smith. The Gamecocks would hold on to win snapping an eight game losing streak since 1933. Here are three takeaways from the game.

Auburn quarterback Bo Nix had a tough afternoon throwing for 272 yards, one touchdown, and three interceptions. The first two drives would see Auburn go up 9-0 after a field goal and a touchdown pass to Eli Stove.

It all went downhill as Nix threw three interceptions which turned into 21 points for the Gamecocks on offense.

His decisions were questionable as he threw two interceptions into tight coverage. Nix did not seem confident outside of the pocket as the Gamecock defense had him on the run.

Nix is a fighter and always gives his best, but he has to be questioned for the decisions he makes in the pocket. He looks uncomfortable under pressure which is something that hasn't changed since last year.

As a second year starter for the Tigers, Nix will have to improve especially away from home. The stats aren't too bad, but turnovers and bad decisions are not going to win games in the SEC.

Auburn running back Tank Bigsby had another solid game with 16 carries for 116 yards and one touchdown. This was his second straight 100 yard game in his career for the Tigers.

Head coach Gus Malzahn spoke about Bigsby's performance saying, “He ran extremely hard again this week, for the third week in a row, broke tackles, ran with an attitude, so he did a really good job, another 100 yard game, I think 16 for 111, so, yeah he’ll be a factor moving forward."

Bigsby's production in the ground game can be a good thing for Auburn's offense moving forward. His strength and speed haven't been seen in the backfield for awhile. After another good showing, his future is looking bright.

How Much Longer Does Gus Malzahn Have Left at Auburn?

Gus Malzahn has been criticized heavily over his tenure at Auburn for many reasons. His record against SEC rivals and his offensive struggles are always under scrutiny. Losses to Georgia and South Carolina are only going to make thing worse for him.

After the 2017 SEC Championship Gus Malzahn signed a new seven year contract worth 49 million dollars. Since that deal, Auburn has finished as high as third in the SEC West.

Malzahn has a combined record of 5-10 against Alabama and Georgia with all of his wins coming at home. His bowl record is currently 2-5 which includes losses in the National Championship and the Sugar Bowl. His only wins were in the Birmingham Bowl and the Music City Bowl.

This year would be a difficult year for anyone to fire a head coach, but it's fair to ask how much longer Malzahn has left. His buyout clause sits at 21 million dollars, but Auburn would most likely not have the funds to pay it.

Malzahn has a history of giving up leads in the second half. On Saturday they lost after leading for a majority of the game.

There is still time for him to turn things around, but the SEC schedule won't get any easier as they have difficult games ahead including Ole Miss, LSU, Alabama, and Texas A&M. Depending on results and the financial situation, the end could be near for Malzahn.

Auburn will travel to Ole Miss next Saturday for another tough SEC matchup. The Rebels lost 33-21 to Arkansas after quarterback Matt Corral threw five interceptions.

Despite Saturday's loss, the Rebels are putting up big numbers on offense and will test the Auburn secondary with their passing game. Kickoff will begin at 11am with TV coverage on SEC Network.