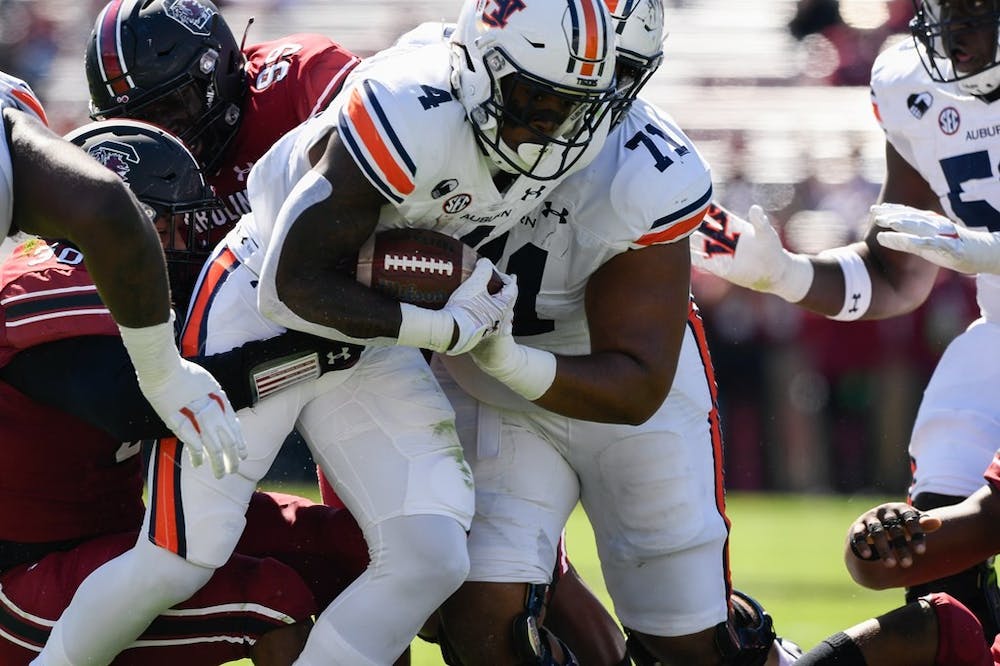 AUBURN, Ala. (EETV) - For the second week in a row, Auburn's offense rushed for over 200 yards. Both games, true freshman running back Tank Bigsby accounted for at least 100 of those yards.

"He looks like an Auburn running back to me," head coach Gus Malzahn said. "He’s running with great passion and that’s a good thing. It fits, too. He’s been able to run the ball effectively. He’s broken tackles. Our offensive line really took that next step with running the football. We just need to keep building upon those things.”

When the Tigers faced off against Kentucky in the season opener, the team only rushed for 91 yards. Auburn's passing offense helped secure win over the Wildcats. The following week against the Bulldogs, Georgia shut down the ground game, limiting the Tigers to only 39 yards rushing.

The second home game of the season, necessity forced the Tigers to focus on their run game against the Razorbacks when quarterback Bo Nix struggled to throw the slicked-up ball amidst the pouring rain. Finally, Auburn's ground game had a foundation to build upon.

Bigsby carried the team with 146 rushing yards, but sophomore D.J. Williams contributed 71 of his own on the ground.

When the Tigers traveled to Columbia, despite the close loss to the Gamecocks, Auburn's run game was there. Bigsby led the team with 111 yards, with Williams carrying for 17 yards over only four carries.

Despite suffering a couple different injuries during fall camp, Malzahn is pleased with the progress Williams is making as a member of the running back corps.

"D.J. is a guy that had a shoulder injury in fall camp. Then he has a toe right after that that’s kind of kept him from being 100 percent really," Malzahn said. "I think he was closer Saturday. He had a good week of practice. He’s a veteran guy that has been in the heat of the battle in some big games."

Another big name on Auburn's running back roster is Shaun Shivers, who has not seen playing time since the season opener at Kentucky where he ran the ball for 29 yards over six attempts. Malzahn believes the starter's return will add another level to the Tigers' running game.

"Shaun Shivers is one of our team leaders," Malzahn said. "You talk about a guy who had a phenomenal fall camp and had a really good half against Kentucky and then got hurt, so that will definitely help when he gets back."

Auburn has even more potential with redshirt freshman Mark-Anthony Richards. Richards battled injuries during the 2019 campaign and did not see any game action. Malzahn hopes this will change in the coming weeks.

"To have all three of those guys -- and I want to say Mark-Anthony Richards, I think he had probably his best of practice that he’s had since he’s been here. He battled some injuries early, too. So I think we’re starting to get healthier in the running back room," Malzahn said.

Despite losing players to injury, the Tigers' ground game has been steadily improving. As offensive coordinator Chad Morris continues to incorporate his offense, the future of Auburn's running game is looking strong, especially once the whole running back roster is active.

The Tigers will look to improve their record and build their ground game when they travel to Oxford, Miss., on Saturday to take on Ole Miss. Kickoff is set for 11 a.m. CT on SEC Network.