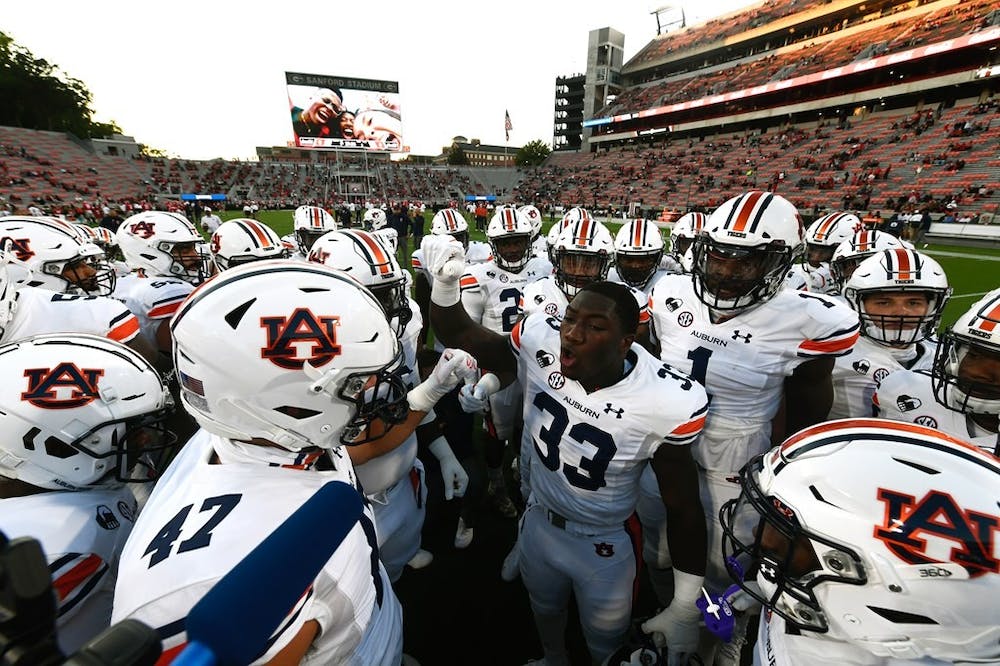 AUBURN, Ala. (EETV) - Following Saturday’s 35-28 victory at Ole Miss, hope has likely been restored within the Auburn faithful.

True freshman Tank Bigsby posted 129 yards and a pair of touchdowns on 24 touches, quarterback Bo Nix hung 238 yards and a touchdown through the air and receiver Seth Williams found himself on the receiving end of a 150-yard outing with a game-winning TD to boot.

A lesser-conversed — and often overlooked — detail still lies within the tape from the Tigers’ victory over the Rebs: the improvement in the Auburn offensive line.

Despite the loss of Brandon Council during Saturday’s contest, the Tiger line was able to limit the Ole Miss defense to only two sacks and a lone hurry on Nix.

Junior offensive lineman Brodarious Hamm was satisfied with the accomplishments of his squad on Saturday and insists that the group is working to improve.

“We’re just growing as a group overall,” Hamm said. “We’re trying to take the next step.”

Despite recording a loss to South Carolina in week seven, Hamm and his peers have had two consecutive weeks of visible improvement from their first three appearances in 2020. The group has found a way to produce enough running room for Tank Bigsby to record over 100 yards in back-to-back games.

Hamm still believes the group has yet to reach its ceiling.

“I feel like we have a lot of room to improve,” Hamm said. “Coach Bicknell talks about that every week. Coach doesn’t want us to get a little better, he wants us to get a lot better.”

As for the passing game, Hamm believes that the mutual confidence between the line and their quarterback will continue to progress as the season moves forward.

Although the Auburn offensive line is seemingly headed in the correct direction, this week’s contest with LSU presents a new challenge: replacing injured Council.

Hamm remains confident, insisting that the Tigers have no choice but to move forward.

“We got guys that can step up and fill the role and be able to go,” Hamm said. “We can’t miss a beat out there.”

The Tiger O-line will have an opportunity to establish and improve themselves this Saturday in their imminent matchup with rival LSU. The game will take place in Jordan Hare stadium at 2:30 CT and will be broadcast on CBS.