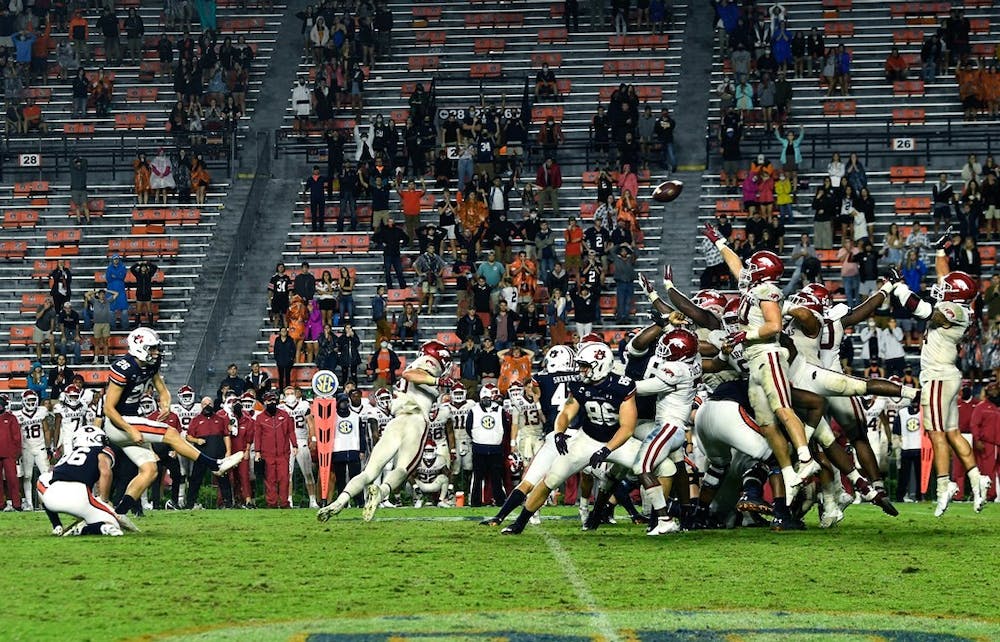 Auburn, AL (EETV)- Auburn narrowly defeated Arkansas by a final score of 30-28. Arkansas gave the Tigers all they could handle as they clawed their way back from behind to take a late lead with less than three minutes to go.

Chaos would ensue on Auburn's last drive as Arkansas believed that they had recovered a fumble when Auburn quarterback Bo Nix spiked the ball. The snap was fumbled and Nix spiked it backwards. The play was reviewed and was determined that the it was dead because the whistle had been blown.

After missing a field goal on the previous drive, Anders Carlson redeemed himself by hitting a 39 yard field goal with seven seconds to go.

Head coach Gus Malzahn spoke afterwards saying, "We had to play without a few guys tonight. It was just next man up. We are glad to get this win."

Conditions were a factor as the rains from Hurricane Delta made things difficult early in the game. Both offenses were held scoreless, but it would be the special teams that would get the first score of the game as Jordyn Peters blocked a punt and Barton Lester recovered it in the end zone.

Auburn would go on to score 10 more points with a field goal and 15 yard rushing touchdown from Nix. The Razorbacks would score two straight touchdowns to cut the score to 17-12 after failing a two point conversion. Carlson would add on to the lead with a 25 yard field goal to extend their lead to 20-12 at halftime.

Auburn jumped out to a 27-18 lead in the third quarter after Anthony Schwartz took a screen pass for 17 yards for his first score of the season.

Felipe Franks led a furious comeback in the second half as he threw for two touchdown passes to put the Hogs up by one. Franks threw for 318 yards and four touchdowns which is a season best for the transfer from Florida.

Auburn's ground game was tremendous as they racked up 259 yards rushing. Running back Tank Bigsby led the way with 20 carries for 146 yards. D.J Williams had 8 carries for 71 yards and Bo Nix added 48 yards as well.

"It meant alot to me," Bigsby said, " I'm very hard on myself but it was really good to have my first 100 yard game and hopefully I will have more to come."

The Tigers improve to 2-1 on the season and they will go on the road to face South Carolina Saturday. Kickoff will be at 11:00am with TV coverage on ESPN.