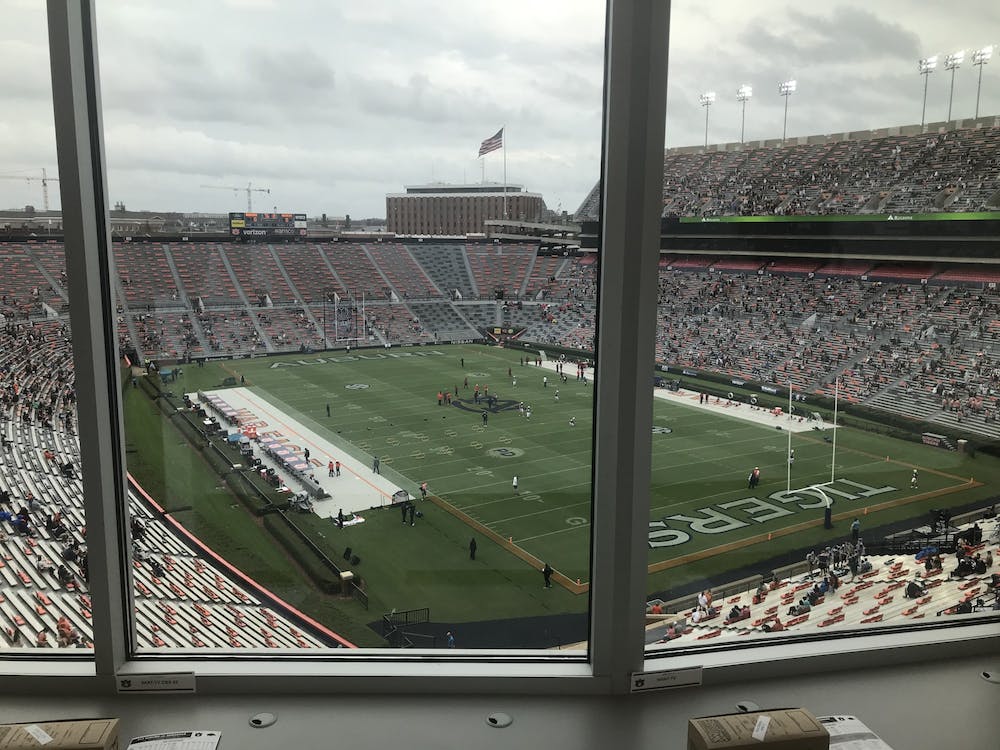 After a wild ending, Auburn comes out victorious as Anders Carlson's field goal would be the difference. Arkansas believed that they had recovered a fumble but the referees determined that Nix had recovered a fumble and spiked the ball therefore making it dead. Auburn escapes what could have been a major upset for the Hogs.

4th Quarter- 0:07: Anders Carlson redeems himself by hitting a 39 yard kick with just seconds to play.

4th Quarter- 2:16: Auburn makes a stop to force fourth down and a punt.

4th Quarter- 11:24: The fumble is overturned as Bigsby's elbow was down.

4th Quarter- 11:24: A huge turnover for the Hogs. Bigsby fumbles on the first play of the drive and Arkansas recovers. Play under review.

3rd Quarter- 4:14: Arkansas scores on their first drive of the second half with an 85 yard touchdown drive capped off by Frnak's third touchdown pass of the game. The Hogs would go for the two point conversion and would not convert. Auburn 20 | Arkansas 18

Start of the Third Quarter: Arkansas will kick off to open the second half.

Auburn's rushing attack has been the highlight of the half as Tank Bigsby leads the way with 106 yard rushing. The offense has opened more holes for the running backs which has been a positive sign.

Jordyn Peters recorded his fourth punt block of his career. The recovery was Barton Lester's first career touchdown and Auburn's first since 2018.

Arkansas figured things out in the second quarter, putting together two straight touchdown drives to cut the lead to five. Felipe Franks has 148 yards passing and 2 touchdowns.

Tigers on top at the break. pic.twitter.com/kmoWXI1tjM

2nd Quarter- 2:15: Arkansas marches down the field again to score Felipe Franks throws his second touchdown pass of the game to De'Vion Warren. The Hogs tried a two point conversion but it would fail leaving the score at Auburn 17 | Arkansas 12.

2nd Quarter- 6:24: Arkansas puts their first points on the board as Felipe Franks finds reciever Mike Woods on third down and goal for four yards. The Hogs mishandled the extra point leaving the score at Auburn 17 | Arkansas 6.

2nd Quarter- 8:10: The rain seems to be letting up. According to the radar it looks as if the huge line of rain has pushed through.

Get get it yourself then 🔟! 💪 pic.twitter.com/6Rq8vQGpND

LET'S GO!@KingPete_x gets his mitts on the punt and @blester10 pounces on it for 6! pic.twitter.com/ZDaFBEbynv

1st Quarter- 4:32: Auburn's special teams comes up with the first points of the game as Jordyn Peters blocks a punt and Barton Lester recovers it in the end zone. Auburn 7 | Arkansas 0

1st Quarter- 6:10: Both defenses are holding their own as we are still scoreless at Jordan Hare Stadium. Weather is also a factor for both teams as the rain continues to fall.

1st Quarter- 10:56: Both teams go three and out on their opening possessions. Both defenses get sacks on third down to stop the drive.

3:05pm: It's time for kickoff as Anders Carlson will kick to Arkansas to open the first half.

2:40pm: Auburn players Big Kat Bryant and Shaun Shivers have not been seen during warmups. Looks as if they are out for this game.

It is absolutely pouring rain! Outer bands from #HurricanecaneDelta2020 have made it to Auburn. pic.twitter.com/ICLYWulnuJ

2:15pm: Severe weather has entered the area and could potentially postpone the game. Auburn students and players remain inside the stadium currently.

2:00pm: Auburn takes on Arkansas in the third game of the season. After a disappointing loss to Georgia last week, the Tigers will look to improve on the offensive side of the ball.

Arkansas is coming off a massive upset over the Mississippi St Bulldogs who defeated LSU in week one. Transfer quarterback Felipe Franks has been a huge part of the offense, throwing for over 400 yards in the first two games.

Weather will play a factor as a line of showers from Hurricane Delta is moving towards the Auburn area. The temperature is currently 78 degrees with winds of up to 12 miles per hour.