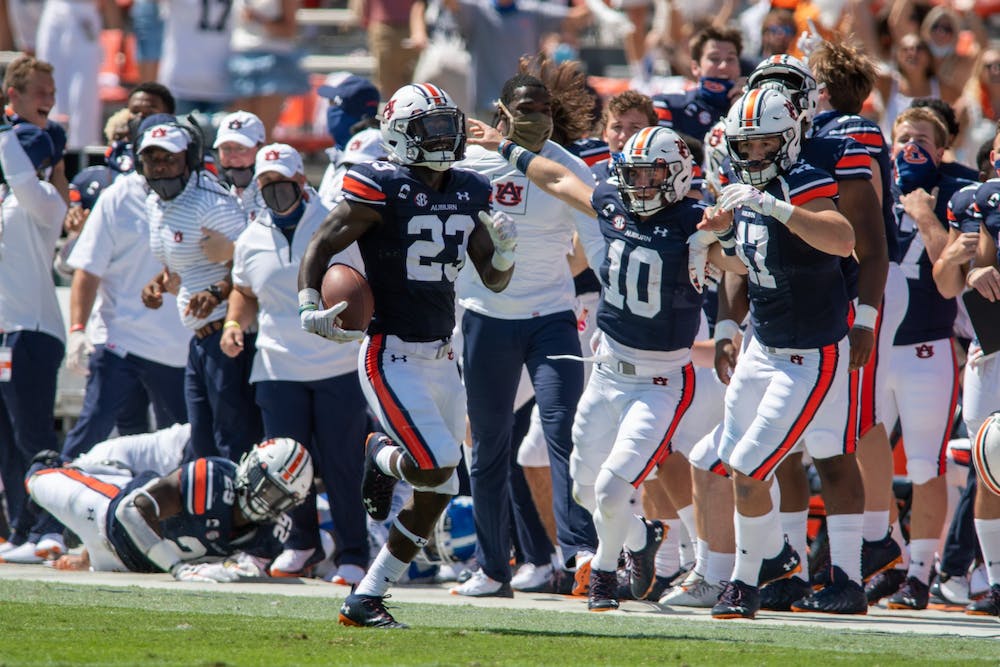 Roger McCreary (23) running down the sideline. AU FB versus Kentucky on Saturday, September 26, 2020 in Auburn, Ala. Joshua Fisher/Auburn Plainsman

AUBURN, Ala. (EETV)- “Sixty Minutes” are both the late Pat Dye’s two most famous words and what it took for the Tigers to get past the Wildcats.

Up against a talented and experienced Kentucky team, Kevin Steele and the Tigers defense knew they had their hands full stopping the Wildcats' run game. However, they did not expect for the Wildcats to maintain possession of the ball for more than two-thirds of the first half.

Even though the Tiger defense was on the field for most of the first two quarters, Auburn ended the first half up 8-7.

Since the offense sat so much during the first half, the Tigers struggled to get a rhythm going. The second half is when the offense finally started rolling.

“We were over there sitting for quite a while time. Kentucky was taking a slow amount of time on offense, they were just taking their time which I thought was obviously different. The game flow was a little bit slower so it was tough to stay in rhythm,” Nix said.

After the halftime adjustments, Chad Morris had the offense hitting on all cylinders.

In the second half alone, quarterback Bo Nix connected with Seth Williams for two touchdowns and Eli Stove for another to cap off his three-touchdown day.

Despite the few months of working together, there is already a noticeable connection between Nix and Morris. This season, Morris is mainly focusing on getting the wide receivers more open to create more big play opportunities. Against Kentucky, Morris coached the Tigers' average completion to six yards more than the average of last season.

Although the passing game was working for the Tigers, the run game struggled to get going. Auburn is known for their run game, but with only one returning offensive lineman, the ground game seemed to never work for the Tigers.

This gave Kentucky ample opportunities to put points on the board. However, three turnovers, two of which were in the red zone, will never get the job done against any team.

“We made too many mistakes to beat a quality opponent like Auburn on the road,” Kentucky head coach Mark Stoops said.

Malzahn was proud of his team's resiliency throughout the entire game,which is also a theme Malzahn is emphasizing this season.

“We talked about playing and fighting for 60 minutes in honor of Coach (Pat) Dye. Today, we were going to do that and for the rest of the season. That's really what we talked about. Our guys did that. The defense and offense complimented each other,” Malzahn said.

With only a two-point lead going into the fourth, the Tigers outscored the Wildcats 14-0 in the final quarter to win 29-13, making Coach Dye proud in playing every minute of the game as if it were their last.

Next Saturday, no. 8 Auburn travels to Sanford Stadium in Athens, GA, to take on the fourth-ranked Georgia Bulldogs in their first top-10 clash of the season. The game can be seen on ESPN at 6:30.