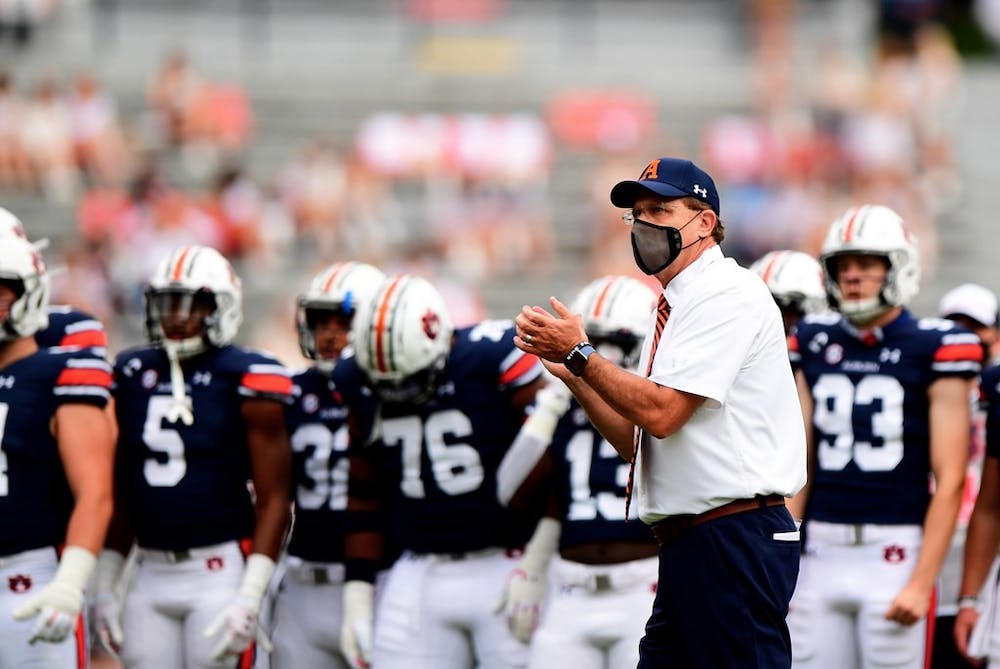 Auburn, AL (EETV)- Auburn opened up the 2020 season with a 29-13 victory over the Kentucky Wildcats in the only ranked matchup in the SEC. Both teams struggled in the first half to score as mistakes proved costly. Auburn fell behind early but would respond with a touchdown drive and a two-point conversion to lead 8-7 at haltime.

Bo Nix's three touchdown passes in the second half would help Auburn pull away in the fourth quarter as the Tigers won their fourth straight season opener. Here are three takeaways from Saturday's game.

Auburn's Defense Preformed Well, But Still Has Room to Grow

Auburn's defense had a difficult time stopping the Kentucky offense which racked up 384 yards of total offense. Kentucky quarterback Terry Wilson threw for 239 yards and one touchdown.

The Wildcats turned the ball over three times which proved to be the difference. One of Auburn's forced turnovers came from Roger McCreary who intercepted Wilson at the goal line and retured it 100 yards. The touchdown would be overturned after a targeting foul was called on Derrick Hall.

Auburn stepped up in the second half as they were able to get pressure on Kentucky and force them into mistakes. Despite the production, the Wildcats managed to put only 13 points on the board.

Although Auburn managed to hold off the Wildcats, they did struggle to stop the passing game. Kentucky was efficient in short to medium passes and converted 12 of 19 third down plays.

It was a good start but the Tiger defense still has areas to work on going into week two. It's only the first game but they will be happy with their performance.

Pass Heavy Offense Could Be The New Normal

Auburn's offense has always been known for it's heavy rushing attack, but the arrival of Chad Morris seems to have changed that philosophy. The Tigers’ offense was very productive through the air as Bo Nix threw for 233 yards and three touchdowns.

The offense had 27 passing plays and 30 rushing plays on Saturday. Comparing to Auburn's last game against Minnesota, the offense ran 45 times and only threw 20 passes. Morris brought a balance of the run and pass which is significantly different than last year.

The Wildcats disrupted Auburn's running game allowing only 91 yards on the ground. Auburn's offensive line struggled to block for the running backs as they faced a stout defensive line from the Wildcats.

Nix and the wide recievers were able to make plays through the air which brings another dynamic to what has traditionally been a run heavy team.

Auburn's running game will have to improve going into Georgia on week 2. The Bulldogs will make it tough for Auburn on the ground but they will need more production from Shaun Shivers and Tank Bigsby. Nix's passing ability was key for victory, and will be next week if they want to remain unbeaten.

Wide reciever Seth Williams stood out on Saturday with a total of 112 yards recieving and two touchdowns. Williams comes into this season with alot of confidence and wants to prove that he is the best reciever in the SEC.

This season he has been added to the Bilitnekoff and Maxwell Award watchlist along with teammate Bo Nix. Coming into the season, Williams talked about his confidence saying, "It's a new offense, but it's always the same mindset that I want to prove that I'm the best reciever on the field."

Saturday was a great start for the junior reciever. His game seems to have improved even from last year which is a good sign for the Auburn offense.

Auburn will face an early test next Saturday against the Georgia Bulldogs. This game will be the first top ten matchup of the season and is also the site for ESPN'S College Gameday.

Georgia defeated Arkansas 37-10 but it was not very pretty. The Bulldogs trailed through the first half and even had to replace quarterbacks. Georgia's defense stepped and forced three turnovers including a pick six.

Both teams will come in looking to establish more rythm on the offensive side of the ball, but both defenses will make it tough for each side. Kickoff for the game will be at 6:30 on ESPN