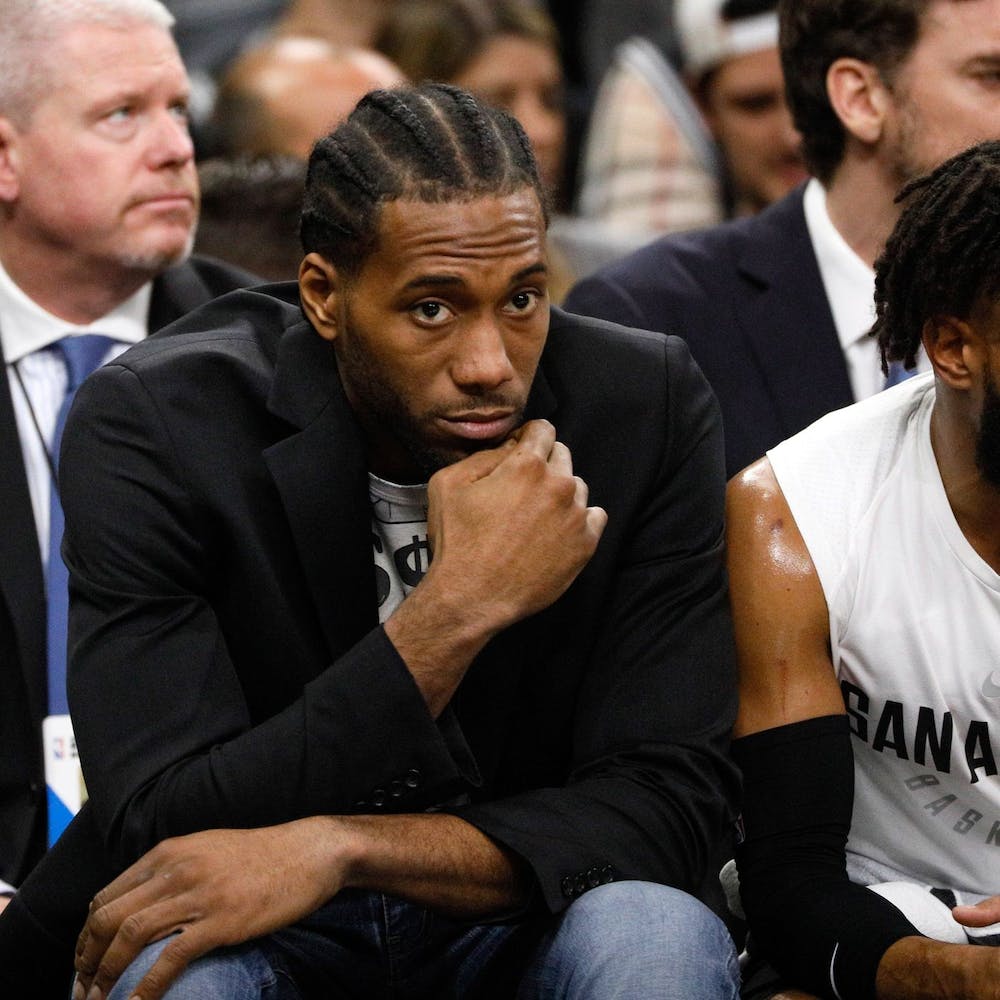 Auburn, AL (EETV) - On May 14, 2017, a Mother’s Day Sunday, the San Antonio Spurs were dominating the Golden State Warriors in Game 1 of the Western Conference Finals. A Golden State team that undoubtedly had four future Hall of fame players on it: Steph Curry, Kevin Durant, Klay Thompson and Draymond Green.

But, San Antonio had one secret weapon, Kawhi Leonard.

His game was reminiscent of a vintage Michael Jordan performance that kids nowadays would see on YouTube. Driving baseline with the pull-up jumper, the patented fadeaway and palming the basketball as if it were an orange with one hand as he drove to the basket to dunk over the regretful defender.

He was on pace for the elite 50/40/90 club. To put that in perspective, only eight players have ever had the shooting split of 50% field goal percentage, 40% from three-point range and 90% from the free throw line during the course of an NBA season: Larry Bird, Reggie Miller, Mark Price, Kevin Durant, Steph Curry, Steve Nash, Dirk Nowitzki and Malcom Brogdon. In layman's terms, Leonard was having an all-time run in the playoffs.

Leonard was playing his best basketball of his career up to that point. Then with just under eight minutes to go in the 3rd quarter, and the Spurs up 76-55, Zaza Pachulia closed out on Leonard, giving him no space to land. Leonard landed on Pachulia’s left foot, which would take Leonard out of the game completely. NBA Basketball play-by-play commentator Mike Breen had the call for this game.

“And Kawhi is down again, and he’s in pain again.”

Up to that point Leonard had 26 points, eight rebounds and three assists in just over two quarters of play. After his injury, it sparked a term that has taken over the sporting world: load management.

Load management is hard to define. Simply put, it’s a program to monitor the physiological stress (load) a player suffers doing any number of activities.

Morning shouting matches from every sports network could be heard all across the globe yelling about this specific phrase. However, they were all talking about the subject without knowing what load management was.

“You have to be careful,” James McDonald, an associate professor in Kinesiology at Auburn University said. “Talking heads on TV just make assumptions, they don’t know the real science.”

Criticism came quick for Leonard as he sat out most of the 2017-2018 season because of the quadriceps injury he was diagnosed with after the 2017 playoffs. Former San Antonio Spurs teammate Tony Parker said that his own quadriceps injury was “a hundred times worse” than what Leonard was dealing with.

With opinions coming from all corners, what was Leonard supposed to do? He has never played the full 82 games in an NBA season. Is taking off more games like playing 65 games in an 82-game season better for long-term performance?

“It's kind of hard to say because it's so individualized,” Abby Brittain, a master’s student in Kinesiology at Auburn University said. “Kawhi knows what his body can take and has to step back when he's pushing it to the edge."

However, it doesn’t start and end with just basketball. Load management is used in almost every form of sport. Whether it's resistance training, conditioning, tennis, softball or baseball, learning to know when to rest the body is the key to performing up to the standards necessary to be a professional athlete. Which is the ultimate goal of any athlete: playing in the big leagues.

The journey to get to the highest point is the most important factor. Often times, youth athletics get overlooked when it comes to resting the body. Specialization, or playing one sport, is something that is harmful to kids at such a young age because the repetitive motion on one muscle group can lead to early body breakdown.

“Wait until later to specialize in one sport, but to play multiple sports as a kid is a great thing,” Kevin Girodano, a Ph.D. student in Kinesiology at Auburn University said. “The more stress, in a safe manner, that you can put on your body as your body is growing is a good thing.”

Therein lies the problem, putting stress on the body in a safe manner. For example, kids who play baseball and no other sport for the rest of their playing career, will have a higher chance of getting hurt because of the repetitive motion on that same muscle group, especially pitchers. This is why there has been a spike in Tommy John and rotator cuff surgeries.

“One of the things that the literature says is that a young athlete playing baseball has got to work on technique so they don't damage themselves,” McDonald said. “You have to rest that particular muscle. If it’s rest for a pitcher, it’s on their shoulder and the arms.”

Tennis has the same issue as baseball, as both sports use load management more than any other sport in the world because of the repetitive motion. Rest is a supreme necessity in those two sports more so than say basketball or football.

However, to put it bluntly, kids should not play one sport as they are developing. They should play multiple sports to improve coordination, strength and speed in all muscle groups. Auburn soccer player Sara Houchin is an example of this.

“I’ve been playing [soccer] since I was four. I did play other sports,” Houchin said. “All elementary school I played in all the rec leagues. In middle school I did basketball, volleyball and track… I’ve never had any major injuries.”

To add to the specialization factor, parents think that if their child is going to be successful in any sport, they should play that sport from their adolescent years to adult life. Parents tend to push their kids too far to reach a goal that the body cannot handle. Yet, outside pressure from the parents isn’t the only thing that’s influencing the athlete’s decision to play or rest.

“I mean there's the influence with cheating in the Astros scandal outside of the sport itself. I think it's everywhere,” Matt Watson, a physical therapist at Elite Rehab Solutions said.  “Money, your agent saying, ‘hey sit this game out you're still getting the same amount paid’ and the shoe companies.”'

A prime example of being of someone being pushed when they weren’t ready is Robert Griffin III.

“RG3 gets injured, it's getting toward the playoffs, we have to play him,” McDonald said. “Did he ever get fully healed? No, and that’s on the coaches.”

Coaches, parents, agents and hometown friends coming to visit to see you, are all outside noise that athletes face every day. At the end of the day, the athlete must listen to their own body.

“When a parent sees or wants to see that their child is good enough to play professionally, they often go or look at the AAU coaches and say why aren't you pushing my kids more,” McDonald said. “Perhaps the coach has seen more talent and knows they're not good enough. It's on the parents as well.”

There is another word for pushing the player too hard: overtraining. And it seems as though rookies in their respective professional sport are getting hurt in their first year more than ever. But, we can attribute that to multiple components.

“It's the really crappy trainers that the pro teams hire and I say that because I used to work with the Redskins and I also worked at the NFL combine,” Watson said. “I think they are lacking skill and training. They want to do what’s sexy and not exactly what the athlete needs.”

Overtraining goes back to youth training and Brittain cites the 10,000-hour rule.

“It takes 10,000 hours to become an expert in a sport or a skill,” Brittain said. “If that 10,000 hours comes too early in an athlete's career it can cause burnout and injury.”

Because rookies are mostly 19 through 21 years of age, their bodies are still growing and adjusting to the “man’s game” in the professional level. Taking a year off after college is somewhat of a “no-choice” trend because of the large number of injuries to rookies. Look at the Philadelphia 76ers, coupled superstars Ben Simmons and Joel Embiid had season-ending injuries their rookie
seasons.

Sitting out gave both players time to bulk up and prepare their bodies for the grueling NBA season. Simmons would go on to win Rookie of the Year the following season with these per-game numbers: 15.8 points, 8.2 assists and 8.1 rebounds. He was able to play in 81 out of the 82 games while putting up rookie Magic Johnson-like numbers (18/7.7/7.3). He garnered 90 of 101 first-place votes, running away with the award by a landslide margin.

On the other hand, Embiid has had an injury list as long as a CVS receipt. Different bodies will have different outcomes. So, does load management work? The answer: it depends from player-to-player, body-to-body. And it doesn’t solve the main problem.

“It doesn’t solve the problem that's out there,” Girodano said. “The problem is when they are growing up and how their training is.”

There are so many areas besides youth training that contribute to load management like outside pressures, psychology, recovery and an exhausting schedule. Every athlete has different upbringings and contrasting ways to treat their body.

Leonard will sit out every three games. Lebron James, on the other hand, spends roughly about $1.5 million yearly on his body, and plays every contest of the 82-game schedule, save for a few games during his 17-year career.

Fast forward two years after Leonard had the quadriceps injury, and he’s lifting the NBA Finals MVP trophy for the Toronto Raptors. Load management worked for him. Yet, there’s little literature behind load management to have a clear-cut answer on how to correctly load a player.

If he’s lifting the NBA Finals trophy in 2020, we may see a trend of players resting during the regular season in favor of being ready for the playoffs. Not just in the NBA, but in all sports.