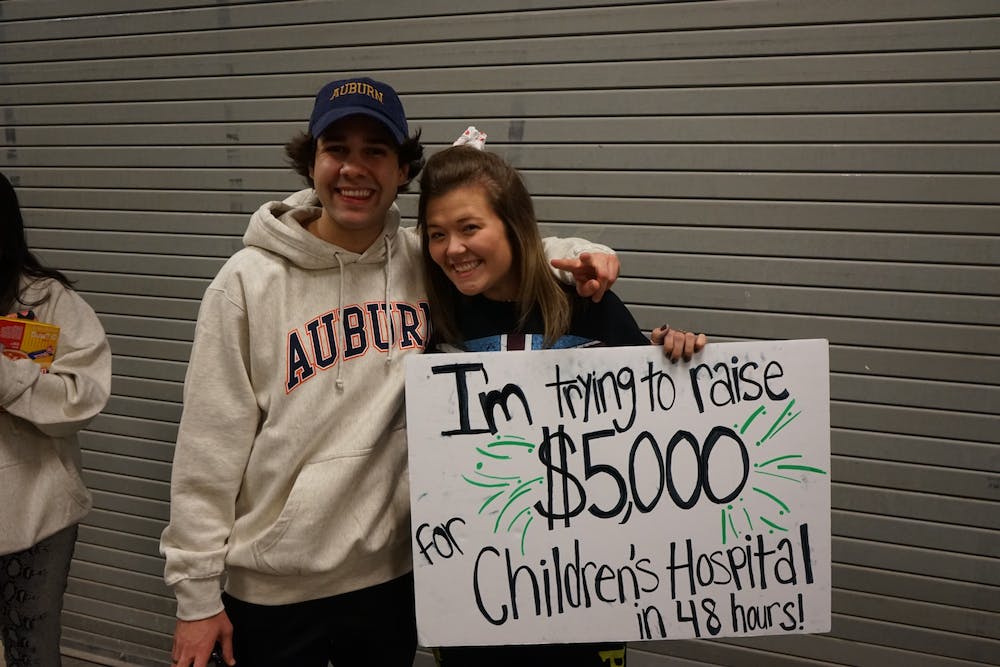 AUBURN, Ala. (EETV) - Auburn student Kacie Hines is a longtime fan of David Dobrik and has watched his videos for the past four years.

Upon hearing that David was coming to Auburn for a UPC event, Hines and her friends decided they would do their best to try and meet him. They secured a place in line at 8:00 a.m. that morning. The event began at 7:00 p.m., and Hines waited almost 10 hours to see her favorite online celebrity.

Dobrik is known for being charitable, and has given away thousands of dollars in tuition money to students at similar events. With this in mind, Hines decided to make a sign telling him of her goal to raise 5,000 dollars in 48 hours. As the event began, Hines' optimism waived. Much to her surprise, Dobrik did take notice of her noble goal.

“I didn’t think he saw my sign. Amongst the midst of all the yelling, he pointed at my sign, and I stood there in shock,” she said.

Hines was then pulled up on stage in front of the at-capacity room of 1,200 people. Dobrik asked Hines to explain Dance Marathon before agreeing to complete her goal donating 5,000 dollars to the cause.

“He asked me to explain AUDM on stage, and then when we went backstage continued asking more about what we do and was genuinely interested. It was one of those moments where I thought he was a good guy on his videos, but looking him in the eyes and seeing him care about what people are doing to impact the world was one of the best feelings in the world,” Hines said.

The impact of the money is not lost on Hines.

“As cheesy as it sounds, every dollar counts. These past couple years have been a pivotal part of this organization as we’ve become closer to the campus and the community than ever before," she said.

For others looking to get involved in helping AUDM reach their goals, there will be another fundraising push in the spring, as well as other opportunities year-round.