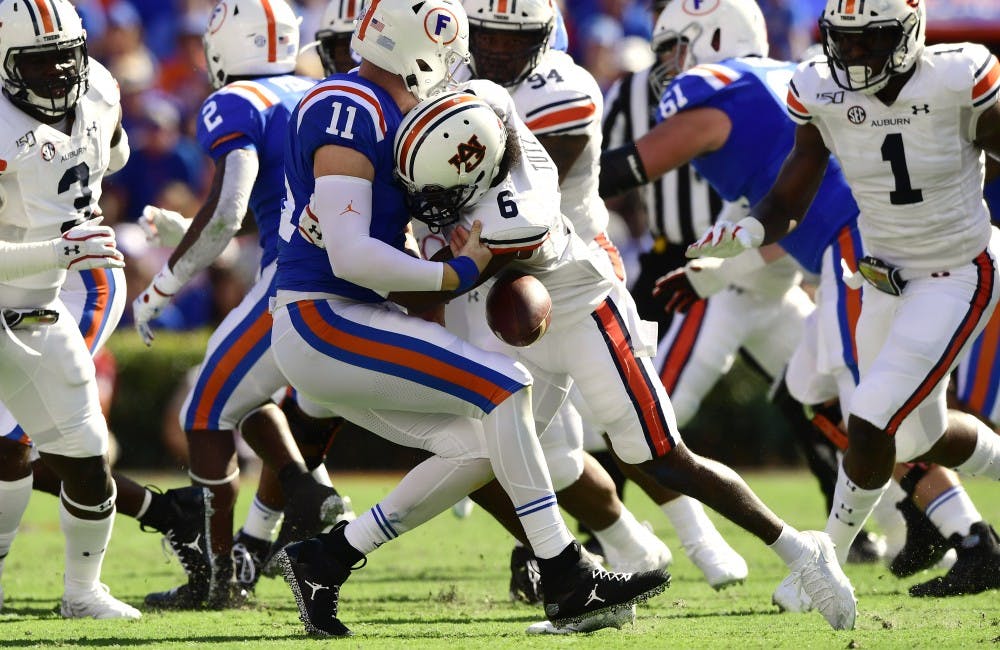 No. 7 Auburn suffered their first loss of the season as the Tigers fell to 5-1 with a 24-13 loss on the road to Florida on Saturday.

"We've got a disappointed locker room." said head coach Gus Malzahn. Our defense played outstanding, had four turnovers, gave the offense the ball on some short fields. We just didn’t get it done offensively. That starts with me. I have to do a better job of preparing our guys and having our guys ready.”

The Auburn defense showed up and showed out forcing three turnovers in the first quarter alone.

Florida opened the scoring with a long score on their second offensive snap as quarterback Kyle Trask found receiver Freddie Swain for the opening points.

After that, the Auburn defense would come up with the ball on three of the next four Florida possessions. Two of the turnovers led to field goals by Anders Calrson from distances of 48 and 39 yards.

Sophomore Christian Tutt forced the first turnover when he sacked Trask and popped the ball out, Chandler Wooten was able to recover and gain possossion for the Tigers.

On the next Florida possession, Auburn linebacker K.J. Britt met Florida running back Dameon Pierce as the ball hit the ground. This time it was defensive lineman Tyrone Trusdell who fell on it for the Tigers, collecting his second career fumble recovery.

Two-time SEC Defensive Lineman of the Week Marlon Davidson had the last turnover for the Tigers as he came off the edge and hit Trask just as he released the ball. Defensive Lineman Derrick Brown picked up the loose ball and returned it 42 yards.

Auburn's offense seemed to be on pace in the first half as Bo Nix would find Seth Williams for a 32-yard strike in the second quarter as the Tigers held onto a four point deficit heading into the break.

In the second half Derrick Brown and the defense would provide another game breaking play when he broke through the line, got to Trask and recovered the ball in the air for his second fumble recovery of the game.

The Tigers sit at 5-1 and 2-1 in conference play heading into their bye week. In two weeks, Auburn is back on the road at Arkansas for another SEC match-up.