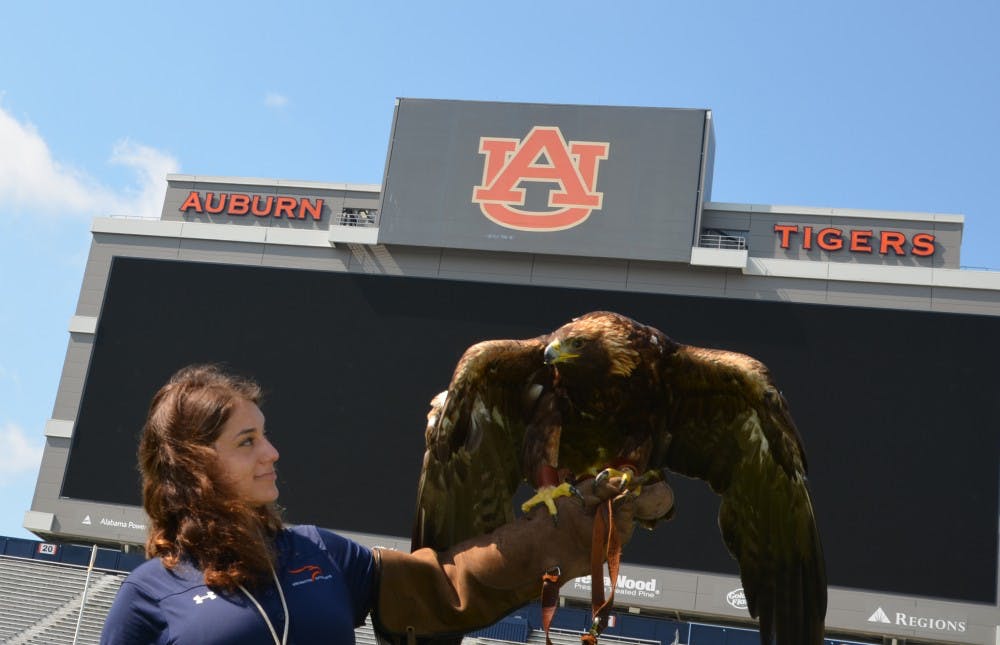 AUBURN, Ala. (EETV) - Gameday veteran Spirit will be joined by a new golden eagle, Aurea, for Auburn's traditional pregame flights.

This will be Aurea's second gameday appearance in Jordan-Hare Stadium, following her first flight last season before the Liberty game.

Nova, Auburn’s official eagle as War Eagle VII, has not flown since 2016 due to a heart condition.

“Nova still makes numerous appearances at our educational shows throughout the year, but we don’t take him to games, even on the sidelines, because of the possible stress on his heart,” said Andrew Hopkins, assistant director of raptor training and education at the Southeastern Raptor Center in the College of Veterinary Medicine.

Aurea was found near Selma, Alabama, and brought to the raptor center in 2016 with an injury to her right wing. Though Auburn veterinarians brought Aurea back to good health, the effects of her injury causes her to have more drag during flights.

“Her flight stamina isn’t quite good enough for her to be released into the wild, but it doesn’t affect her flying in the stadium because she’s not chasing a live animal,” Hopkins said.

Since then, she has been a fixture in the raptor center’s educational programs and has participated in nearly 400 presentations around the Southeast.

Trainers said they usually don't know which eagle will fly until about an hour before kickoff.

“We will bring both eagles to the stadium and look at their game face, or demeanor, and decide which one we want to use,” Hopkins said. “Of course for games like the military appreciation game, we like to use bald eagle Spirit.”

Fans can attend the raptor center’s program Football, Fans and Feathers, at 4 p.m. on Fridays before home football games. Visitors can see the raptors up close as they are free-flown from towers and around the amphitheater.