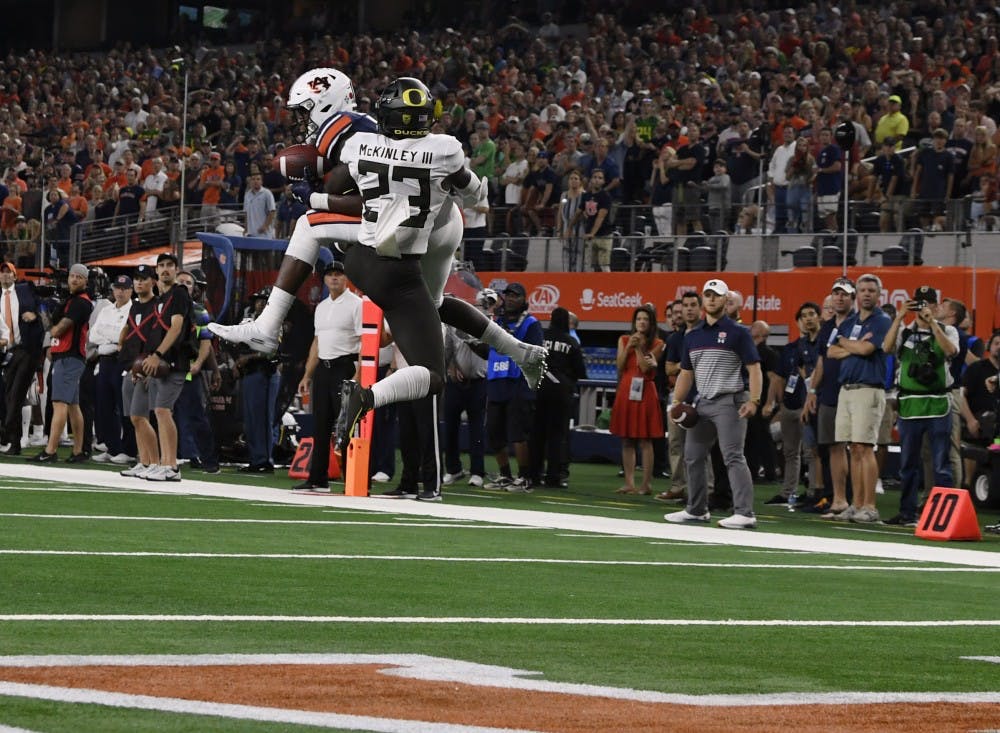 Arlington, TX (EETV)- Auburn fans are breathing a sigh of relief as the Tigers defeated Oregon in the final seconds of the game with a touchdown pass from freshman Bo Nix to Seth Williams.

After trailing 21-6 in the third quarter, Auburn scored twenty-one unanswered points to stun the Ducks who had shut down the Tigers for much of the game.

Auburn did not have a great first half as the talented Oregon offensive had the Auburn defense on their heels. Oregon jumped out to an early 14-3 lead with back to back scoring drives.

Auburn's offense stalled in the red zone as they had to settle for a field goal after an 83 yard fumble recovery from Big Cat Bryant. The Tigers would trail at halftime 14-6.

Oregon would tack on another touchdown to take a 15 point lead but the Tigers wouldn't lay down easy. With 4:20 left in the third quarter, Bo Nix found Eli Stove for an 11 yard touchdown pass to get the Tigers down eight.

The Tiger's defense stepped up big in the second half keeping the Ducks out of the red zone to keep them in the game. Nix and the Tigers drove down the field and backup quarterback Joey Gatewood finished off the drive with a one yard rush for a touchdown.

Needing another score late in the game, Auburn put the ball in the hands of their freshman quarterback who made some clutch plays to get the Tigers within field goal range for the win.

With 16 seconds remaining, Nix threw a ball for Seth Williams who made a jumping catch for the winning touchdown. Oregon would get one chance to throw a hail mary but it would fall short to give Auburn a crucial win to start the season.

The comeback was the largest since 2010 when Auburn overcame a twenty-four point deficit to defeat Alabama 28-27.

Auburn's top rusher was Jatarvius Whitlow who ran for 116 yards in the game. Bo Nix went 13-31 for 177 yards and two interceptions and two touchdown passes.

Auburn earns their first win of the new year and they will return to Jordan-Hare Stadium next Saturday to face the Tulane Green Wave at 6:30 PM.