Join Coach Pearl in the fight to AUTLIVE 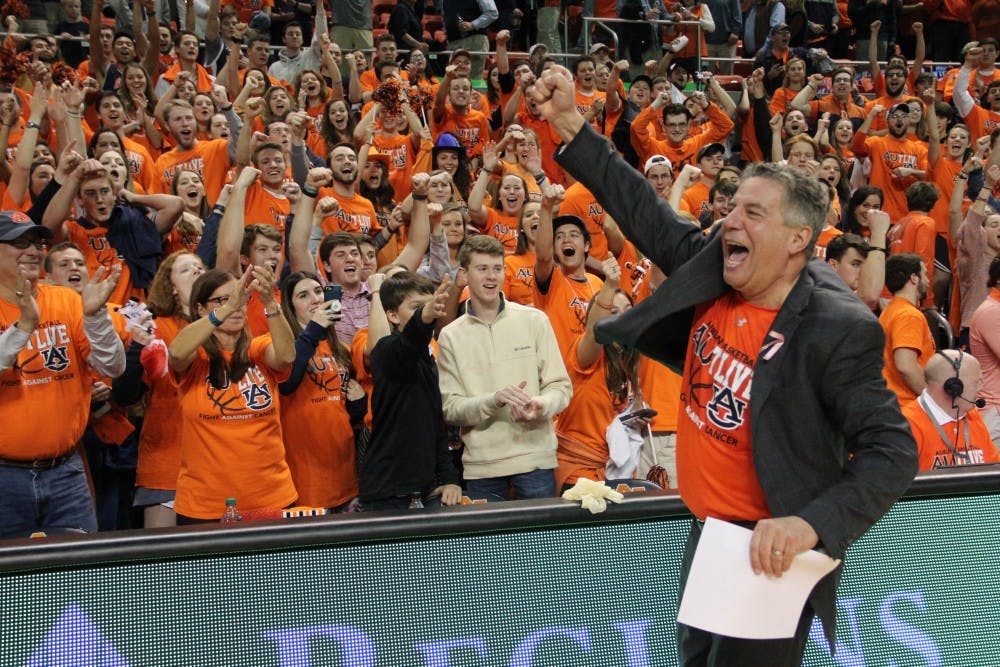 
Bruce Pearl celebrates beating the University of Alabama during this year's AUTLIVE game on Feb. 2, 2019. Photo by Ellie McCoy.

AUBURN, Ala. -- March Madness is widely known for its unpredictability. In 2007, it proved itself to be no different for the University of Tennessee men’s basketball team and then coach Bruce Pearl. The team had made it to the Sweet 16 round of the tournament, when they lost to the future runner-up team, the Ohio State Buckeyes. A loss in the tournament marks the end of the season. But for Pearl and his team, the most unpredictable of all was yet to come.

“I got a call from my athletic director, ‘We’ve got to meet with Chris Lofton, something’s wrong.’ I walk into the room and there’s a doctor, the AD, there’s Chris Lofton and there’s his parents,” remembered Pearl. “Chris failed a random drug test.”

Pearl immediately thought that this news could not possibly be true. He knew that his player would not go near a cigarette, alcohol or drugs of any kind. The doctor told the room that there were three possibilities as to why Lofton could have failed this drug test: the first being that he took some kind of steroid; the second being that he was pregnant; the third, and the cause of the failed drug test, was that Lofton had testicular cancer.

“Sure enough, because of a random NCAA drug test, because he detected it early, it saved his life,” said Pearl.

Lofton was able to receive treatment and return for the next year’s basketball season. Pearl and his team, however, knew that their mission was not over.

When one of Pearl’s managers suggested to him that something had to be done and the story had to be told, they decided to start selling T-shirts labeled with the slogan, “OUTLIVE.” Through this new project, they were able to raise about one million dollars while also spreading awareness throughout their community.

When Pearl arrived at Auburn in March 2014, he brought this program and his passion with him, changing the name from OUTLIVE to AUTLIVE.

“Auburn, and the Auburn family, as you would imagine, has embraced it,” said Coach Pearl.

The Auburn men’s basketball team hosted their 2019 AUTLIVE game on February 2, against the University of Alabama. The game was packed, with the student section’s line wrapping around Village Dining, and all the way to South Donahue Drive. Pearl decided that he would provide 1,500 AUTLIVE shirts to line the benches of the student section. Pearl also encouraged non-student fans to support the cause by buying the $20 T-shirts, with all proceeds going toward AUTLIVE.

“I need them to spend twenty bucks, knowing that about thirteen of those dollars, seven for the cost of this t-shirt, and thirteen dollars are going to go directly to a patient that is in the middle of chemo radiation, or therapy to beat cancer,” said Pearl. “AUTLIVE is a way, through nine agencies in the state of Alabama, for us to put that money directly in the pocket of a patient battling cancer.”

Tonya Prewett is an Auburn resident, and a representative for Smile-A-Mile for children, one of the agencies that benefits from AUTLIVE.

“I have witnessed the incredible impact Coach Pearl and his staff have had on the lives of children battling cancer,” said Prewett. “From visits to the hospital, to inviting these children to the locker room before a big game, the heart of Auburn men’s basketball is to let these children know that they are not in this fight alone.”

The orange AUTLIVE shirts drowned the navy blue bleachers, and on top of each shirt laid a sign, provided to all fans at the game, that allowed students to write who they were fighting cancer in honor of. The second the students arrived, they threw on their new shirts. For any student that did not oblige, they were shown on the jumbotron until they were ready to join the fight.

DeFalco is a junior piccolo player from Madison, Alabama. DeFalco was diagnosed with cancer in the spring of 2018, causing her to have to stay at home to take classes online during her junior year while she goes through treatment at Children’s of Alabama Hospital in Birmingham. After her diagnosis, the band was working on planning all of their halftime shows for the upcoming football season. Dr. Corey Spurlin, the director of the marching band, suggested that they do a show in honor of those battling cancer and cancer survivors.

“I’m not exactly sure how, but Coach Pearl found out about what we were planning, and since he has his AUTLIVE foundation, he got into contact with Dr. Spurlin,” said DeFalco.

This halftime show was able to include DeFalco through a presentation on the video board and by getting her to the Tennessee game to watch the AUTLIVE halftime show.

“It was pretty surreal, that it started from a small idea, and with AUTLIVE, it became a full halftime show that they did,” said DeFalco.

Pearl gave DeFalco and her mother tickets to the AUTLIVE basketball game, where they sat among other members of the AUTLIVE campaign.

“It was cool to meet some more people who can really understand exactly what I am going through,” said DeFalco. “And beating Alabama was really great.”

Pearl’s AUTLIVE initiative is not just focused on raising money for patients, but also on providing them support and encouragement throughout their battle. Aside from the halftime show in the fall and the AUTLIVE basketball game, DeFalco has had the support of Pearl and AUTLIVE throughout her entire battle with cancer.

“Coach Pearl himself has been a huge impact, I think. He calls me or texts me every now and then to check up on me and see how I am doing,” said DeFalco. “Whenever I am in Auburn, he will let me watch basketball practice, or show support from the whole team, to let me know that I am supported by them.”

Pearl knows that his job is to win basketball games, but that is not why he does what he does. He wants to be there to get kids graduated, help players grow and he wants to be able to use his position to try to help others.

“This campaign is just one way that I am able to serve,” said Pearl. “I am just grateful for the partnership at Auburn, because I’m not alone. We’ve got a lot of volunteers and a lot of people in the athletic department who really work hard to make this happen.”

Pearl described his love for giving back and helping others a calling that he has from God.

Right now, AUTLIVE is mostly seen on campus through the Auburn men’s basketball team, but Pearl would like to see its reach grow even further, possibly even becoming Auburn University’s fight against cancer.

“I’m just blessed for the opportunity to serve,” said Pearl. “I am so grateful for the university leadership and the students who are participating and making a difference.”