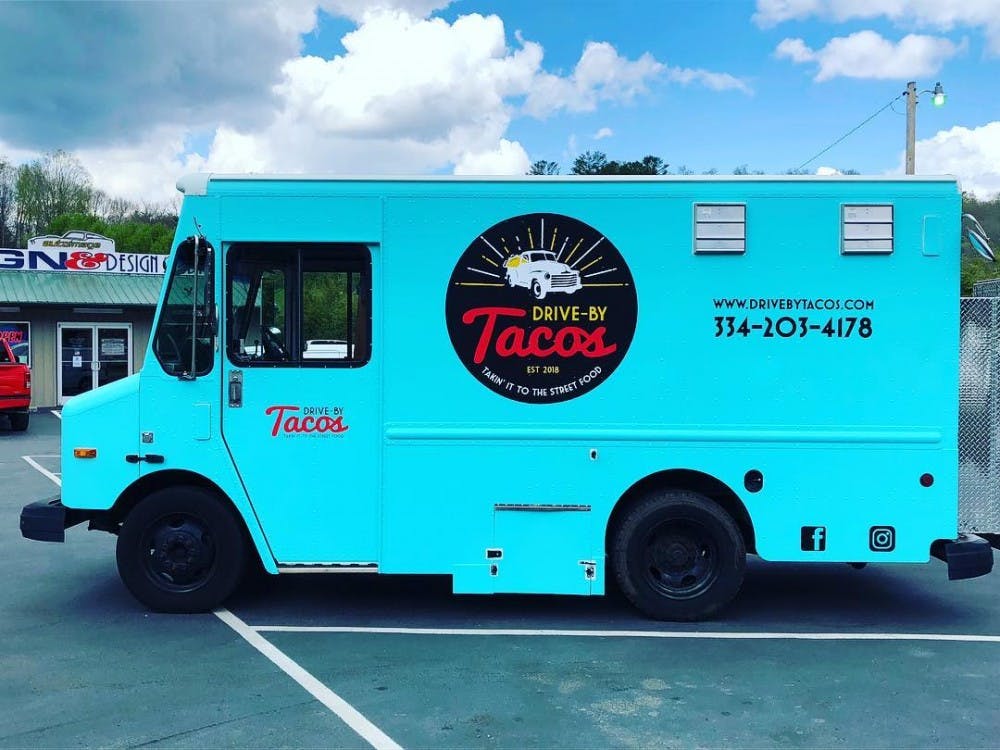 Auburn, Ala. -- If you have been in Auburn this summer, you may have caught a glimpse of Auburn's newest food truck: Drive-by Tacos.

The Drive-by Tacos' bright blue truck arrived in Auburn in the middle of June from Boone, North Carolina. Jason and Kellie Pope, the owners of the truck, offer a menu of tacos “different from the traditional Tex-Mex style taco.”

The Pope's got into the business in Boone after falling in love with a similar food truck, Habañeros. Eventually, they decided the best way to serve their endless taco craving would be to buy the food truck, turning it into what they now call the Drive-by Tacos food truck.

“The couple that owned the truck in Boone are originally from Hawaii, so a lot of the menu is asian inspired, so sort of an Asian fusion style taco,” said Kellie. In addition to their Asian fusion tacos, including Thai chicken, crab cake and shrimp tacos, they offer chicken and pulled pork tacos, in addition to some sliders. “They all have a very unique combination of different flavors and spices."

The couple had lived in Boone for two years before they decided to make the move to Auburn. Kellie, a Tallassee native, grew up around the Auburn family and knew that she always wanted to move back home. So, after buying rights to the menu, they brought their beloved truck down to the plains.

“Currently we are still exploring where we want to be on a regular basis,” said Kellie. But, so far, they have been at several housing complexes like the Grove and the Beacon, and have also made appearances at several Auburn businesses.

"We have been overwhelmed by the support of the community," explained Kellie. Several businesses have offered the truck space at their locations, to serve their employees and serve the community.

As for getting on campus, the couple has set up meetings with the school and hopes to get on campus in the fall.

"We recognize that for many students there are limited food options at lunch time due to the demands of their coursework and due to the physical proximity to campus dining," said Kellie. "We want to be able to serve those students so that they have more food options throughout their week."

Drive-by Tacos is more than just a taco truck. The Popes have teamed up with a Boone based organization called "Wine to Water," a non-profit organization that works to provide water to communities who do not have access, who they give a percentage of their proceeds to.

"We learned of them while we were living in Boone and started supporting them as a family on a monthly basis,” said Kellie. “Once we started this business we decided it would be a good way to give back.”

Their hope for the future is to team up with some local non-profit organizations as well, and focus on serving those in need of food. One organization that has inspired them has been the Nashville Food Project, who works with the community to alleviate hunger in Nashville.

The food truck has a very vibrant social media presence, and posts where they will be during the week on Sundays. Since they are new to town, they are also currently hiring.

“We just want to serve our community and that is a huge part of our story," said Kellie. "We hope to have the opportunity to serve the local Auburn community and let them get to know us as well.”