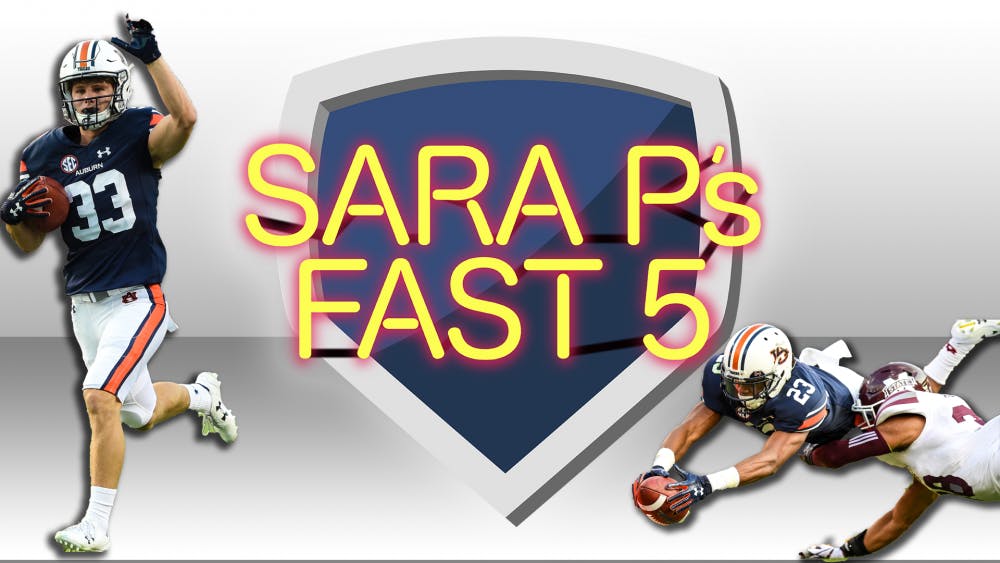 Auburn, Ala. (EETV) - The now No. 12 Tigers certainly put on an offensive show in their 49-10 win over Mississippi State.

Auburn finally looks like the team they were expected to be, being dominant on both sides of the ball.

Here are my 5 takeaways from the Tigers route of Mississippi State:

He came to Auburn without playing a single snap in almost 2 years and having played 4 college games.

And this week in the route of the Bulldogs, Stidham is finally playing like the quarterback we all expected and hoped he would be.

The main thing that comes from these numbers is that Stidham has confidence in his arm to throw the ball down the field for the deep threat.

He was able to hit four different receivers for passes longer than 40 yards and considering he looked afraid earlier this season to throw the ball, hitting multiple players for deep passes shows Stidham is finally confident in himself.

Stidham is officially the quarterback we expected him to be: cool, calm, and collected with a cannon of an arm. And to put it bluntly, he looks like a quarterback that can lead Auburn to make a postseason push.

2) The Secondary is No longer a weak spot

If Auburn's defense had one weakness earlier this season it was their secondary. The secondary looked nowhere near as strong at the defensive line.

If the win over Mississippi State showed anything was that the secondary is now just as strong at the defensive line, leaving the defense without a weak spot.

Prior to the week 5 game, Auburn's defense was number one in overall defense in SEC and number four in the country.

The secondary was able to contain the Bulldog passing game, holding quarterback Nick Fitzgerald to 157 yards and one touchdown.

Did I hear someone on TV say Auburn is the only defense to not give up more than 14 points in a game?

On top of containing the play-action oriented Fitzgerald to those numbers, the Auburn secondary was able to pick off the Bulldogs twice, one resulted in the Tigers first pick-six of the season.

Javaris Davis was the first Tiger this season with a pick-six, something that is notable moving forward.

I've been mentioning this for weeks, but the win over the Bulldogs only solidified my hunch. Kamryn Pettway has officially lost the pep in his step that he had last season. He seems slower and weaker this season

In Auburn's win, Pettway was only handed the ball 5 times. For the back Malzahn referred to earlier this season as the "primary back", that is not a lot of carries.

Pettway also only had 6 yards, averaging just over a yard per . This is not a good thing considering last season Pettway was a threat every single time he touched the ball to take it the length of the field.

He also managed to fumble the ball away for Auburn. Is it his health that is hurting him right now? Maybe, but time will tell.

Might wanna sit Kamryn Pettway until healthy, 'ya know? I'm no coach. Just a bear. I suck the heads off fish. But, I mean, why play him?

Kerryon Johnson has now emerged as the number one back for Auburn. He is the back that seems to have improved the most over the off-season.

Johnson had 3 TDs for the Tigers along with 116 yards. These numbers compared to Pettway speak volumes.

After this game, I can't imagine seeing Pettway regain the step he had last season. He seems slower and has clearly lost his number one back position to teammate Johnson.

4) The Team is the team everyone expected

After the first three games of the season, every Tiger fan began to doubt the preseason hype about how Auburn would do this year.

Well, with back to back convincing wins, it's easy to see that the Auburn talked about in preseason is the Auburn we are seeing now.

And the Lord said "let there be Auburn Football" pic.twitter.com/o9Faxe5XFN

The Tigers have a balanced offense, throwing for 267 yards and rushing for 244 yards. Earlier in the season, I said that I expected Auburn to have this type of balanced offense, and now we are finally seeing it.

Auburn had 4 rushing touchdowns from two different players and 2 TDs through the air against Mississippi. And to add onto that, the defense added a touchdown of their own.

The missing piece of the Auburn team was the offense, and now that the offense has finally clicked, the Tigers are the force everyone expected them to be the beginning of the season.

5) The Tiger Fans are Hype

Mississippi State had 7 false starts at Auburn, something coach Gus Malzahn said was because of the fans.

"I think we have the best home-field advantage in college football," Malzahn said post game. "They were loud and a big part of our success tonight."

With the Auburn success on the field, the fans are certainly hopping back on the bandwagon and are louder than ever to support their Tigers.

As the season continues to progress the way it has, I expect Auburn fans to get louder and louder in support of their Tiger team.

This will be a huge advantage when UGA and Alabama come to town in November.