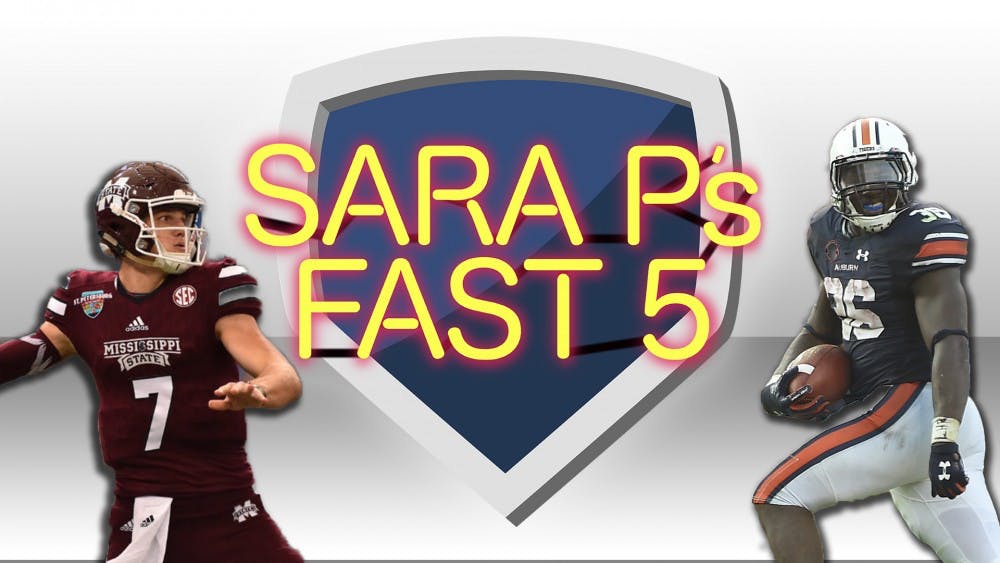 A seemingly impressive Mississippi State is looking to rebound after a detrimental loss to UGA in week 4.

A team that looked to pose a major threat to the Tigers now seems beatable.

Here are my 5 keys to an Auburn win over MSU:

Mississippi State has been known to do a play-action pass type offense all season long. They have utilized their run to catch defenses cheating only to have wide open receivers when they decide to pass.

The Bulldogs average about 268 yards rushing per game, which is a pretty high amount. However, the Tiger defense has only allowed a total of 390 yards rushing this season.

On top of that, Auburn has held opponents to an average of about 236 yards a game. That stat alone will make it hard to Mississippi State to run the ball against Auburn.

The Mississippi State running back Aeris Williams doesn't even average 100 yards per game, he actually only averages 90.

The Auburn defense has shown time and time again this season that they are capable of stopping the run with the defensive line anchored by Marlon Davidson and Jeff Holland.

If they want to stop the Mississippi State's trademark offense, they will have to stop the run and force the Bulldogs into passing situations more often.

Fitzgerald is an option quarterback similar to Bryan Kelly of Clemson. He can run and throw the ball with ease at any time.

Just last season, Fitzgerald led the SEC in total offense. Like I said, he can both run and throw the ball, having nine 100 yard rushing games and has had at least 2 passing touchdowns in three games this season.

When Nick Fitzgerald averages 6+ yards per rush in a game since the start of 2016 Mississippi State is 8-2 & 1-6 when he does not.

The option quarterback has yet to challenge the Auburn defense this season. Against Clemson, they held their offense to 185 passing yards and 99 yards rushing.

And against Georgia Southern, the triple option offense didn't create a problem for the Tigers, holding them to 78 yards total offense.

The main concern with Fitzgerald is his effective run game. He averages about 7 yards every time he runs with the ball.

So far this season, the Auburn defense has been able to identify the running quarterback and stop the run before it even begins.

The Tigers will have to continue this trend against Fitzgerald if they want to totally halt the Mississippi State offense.

Mississippi State has a pretty good defense, but they are atrocious at run defense. This season they have only held 1 team to less than 100 yards.

And well they have allowed 506 total rushing yards this season, that is a lot through 4 games.

The Auburn offense has finally been able to figure out their run offense, rushing for 5 rushing TDs against Mizzou in week 4.

But looking at Auburn, their run game is most effective when Kam Martin is used.

In games when Martin is in the rotation, the Tigers have rushed for 605 total yards and 8 TDs. However, when he hasn't been used (think Clemson and Mercer) Auburn has 3 TDs and 189 rushing yards.

That's a huge difference, and it's clear to see that the Auburn run game is way more effective and established when Martin is in the rotation with Johnson and Pettway.

This week Malzahn said that both Johnson and Pettway are healthy and ready to go this week, but if the Auburn offense wants to be successful in the run, Malzahn has to use Martin.

Since the 11 sack performance at Clemson, the Auburn offensive line has stepped up and has been able to provide protection and time for Jarrett Stidham.

Stidham has been much improved since week 2 at Clemson, and I think that is partially because the newcomers to the offensive line have stepped up.

Just last week Stidham threw for 218 yards and a touchdown, which gave him 846 total yards on the season and 3 passing TDs.

With the added time, means Stidham has been sacked less. Mississippi State has only 6.5 sacks on the season, aka they don't pressure easily.

If the offensive line of Auburn can hold and play like they have been able to play, then Stidham will be able to sling the ball around, giving the run game an even better chance of getting started.

Mississippi State has a reputation putting away games that they are leading. They are 57-4 when leading at half and 58-2 when leading after the third quarter.

Auburn has to be able to stop the Bulldog offense on defense and then, in turn, must be able to put points on the board themselves.

If Auburn can keep Mississippi State from taking a lead, the Tigers are looking at a better chance of winning their second SEC game this season.