Braves Are Undefeated in SunTrust Park 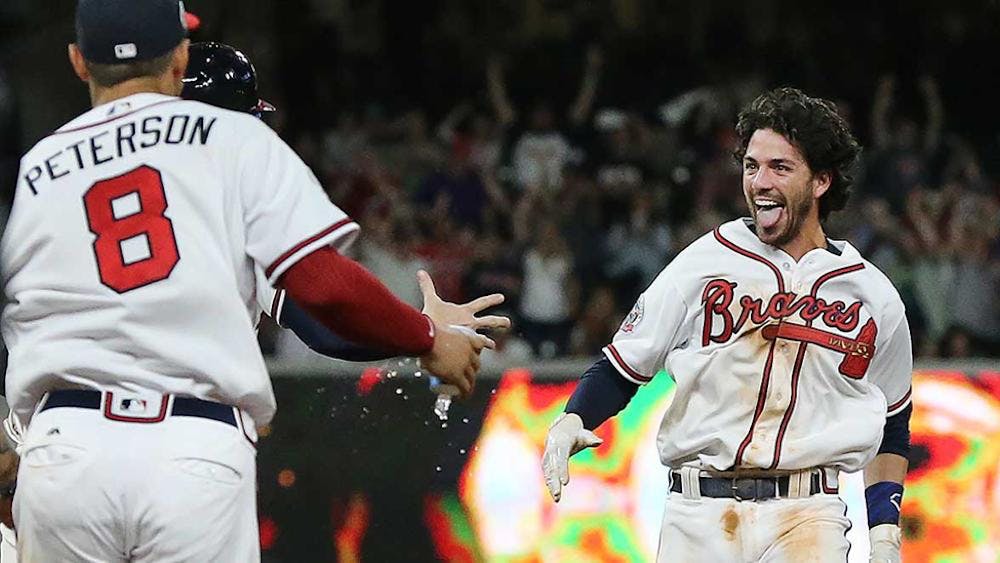 Dansby Swanson celebrating after his walk-off single. Photo via AJC.com.

AUBURN, ALA. (EETV) - The Atlanta Braves (2-6) had their home debut in SunTrust Park against the San Diego Padres (5-5) over the weekend.

The Season of Firsts inside SunTrust started Friday night. The first game in SunTrust could be nicknamed the Ender Inciarte game. Inciarte recorded the first out, hit, score and homerun inside SunTrust. He had two homeruns in the game, his third homerun in the last seven at-bats. Julio Teheran was the first person to grace the mound Friday night and got the win. He stayed there for six innings, allowing five hits, two runs and five strikeouts. Jim Johnson came in to save the game for the last inning, giving up one hit and throwing one strikeout. Padres’ pitcher, Jhoulys Chacin, was given the loss as he pitched for 5 innings. He tossed three strikeouts and gave up eight hits and four runs. Inciarte and Nick Markakis each had two RBIs. Freddie Freeman, Tyler Flowers and Inciarte had two hits apiece. The Braves captured the first game, with a 5-2 win.

Game two came Saturday night and R.A. Dickey got the start for the Braves. He pitched for six innings, with seven hits and two runs while throwing six strikeouts. Dickey had 63 strikes on 89 pitches. Clayton Richard started for the Padres and was also on the mound for six innings. With nine hits, four runs and two strikeouts, Richard also got the loss. Saturday night was the night of homeruns. Both teams had two. Hunter Renfroe and Austin Hedges hit homers back-to-back in the top of the second for the Padres. The homeruns for the Braves came back-to-back in the bottom of the sixth from Brandon Phillips and Adonis Garcia. Johnson got the save again for the Braves. He came in for the last inning and recorded two strikeouts. The Braves bullpen has a 10 scoreless inning streak at the end of the game. In the last 10 innings, they have only given up two hits. Dansby Swanson, Markakis, Phillips and Garcia all had one RBI. The Braves won 4-2.

Sunday was an offensive day for the Braves with a 9-2 win. Bartolo Colon got the nod and started for the Braves. Rewarded with the win, Colon allowed just one hit and run in seven innings and threw six strikeouts. Pitching for the Padres was Trevor Cahill, who got the loss. He pitched for 5 2/3 innings, with four hits and runs while throwing eight strikeouts. Cahill kept the Braves hitless until Phillips hit single in the bottom of the fifth. In the top of the eighth inning, the bullpen streak of 13 scoreless innings came to an end when Ian Krol allowed Ryan Schimpf to score on a passed ball. Inciarte hit yet another homer for the Braves. Schimpf also hit a homerun for the Padres. Inciarte and Flowers went 2-3 at-bat. Phillips went 3-4 at-bat.

The final game was played Monday night as the Braves tried to go undefeated in the series and inside SunTrust. Jamie Garcia started for the Braves and pitched for 6 1/3 innings. He gave up five hits and two runs while throwing four strikeouts. Johnson got the W, pitching the final inning with one hit and one strikeout. Brandon Maurer was given the L for the Padres. He pitched for 2/3 innings, giving up three hits and one run. Freeman hit two homeruns, one in the third and the other in the eighth. This was Freeman’s second two homer game this season. He also went 4-4 at-bat with three RBIs. SunTrust had its first walk-off hit occur Monday. With the game tied at 4 apiece, Swanson hit a walk-off single that brought pinch runner Chase d’Arnaud home for the winning run, 5-4.