Around the Bases at the Capital City Classic 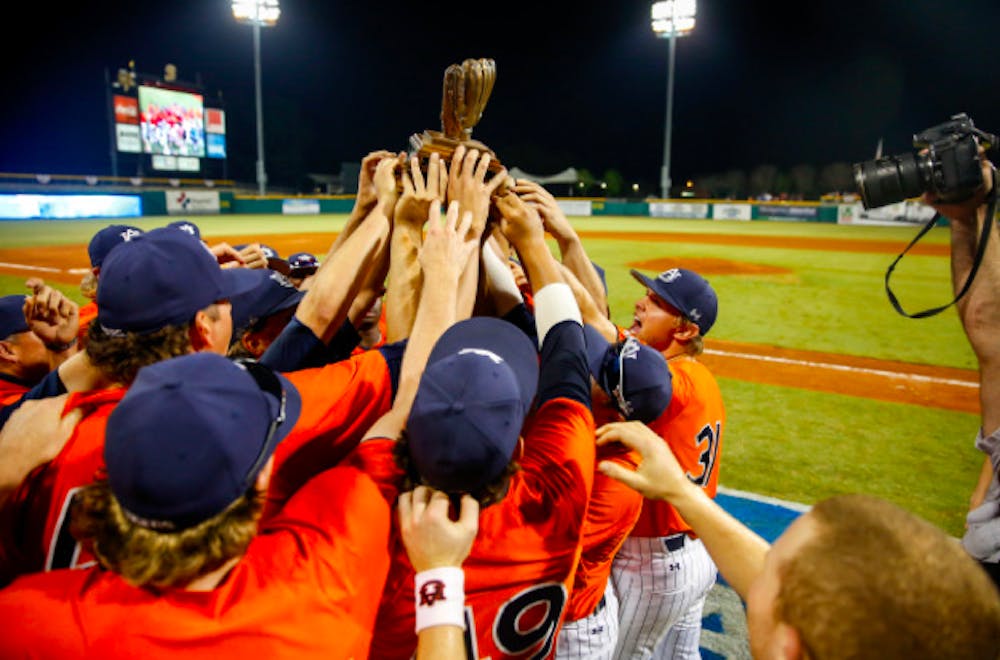 Auburn celebrating its win over Alabama in the Capital City Classic. Photos via AuburnTigers.com

Auburn, Ala. (EETV) – No. 17 Auburn played in-state rival Alabama in Montgomery last night in the Max Capital City Classic. The Tigers moved to 21-6 after beating the Crimson Tide (12-13) for the third time in a row at a score of 4-3. Auburn has won eight out of the nine games played in Riverwalk Stadium.

Four pitchers graced the mound Tuesday night, the first being Christian Camacho. The freshman pitcher was on the mound for 3.1 innings, allowing four hits and three strikeouts.

In the top of the third, Auburn pulled out to a 3-0 lead. Josh Anthony got the first run on the board off a Will Holland bunt. The next two came off a Daniel Robert single to centerfield that brought Holland and Blake Logan home.

Corey Herndon, Ryan Watson and Andrew Mitchell came in to pitch the rest of the way. The trio shutdown Alabama, only allowing one hit and retiring five batters.

Alabama scored one run each inning in the bottom of the third, fourth and fifth innings. These tied the game up at three all.

The top of the seventh inning came around and Anthony brought Robert home on a single, giving the lead to the Tigers at 4-3, the final score of the game.

Jay Estes got MVP of the Classic.

Auburn hosts the No. 6 South Carolina Gamecocks this weekend. The first game is Friday at 6 pm.