A Tradition Unlike Any Other 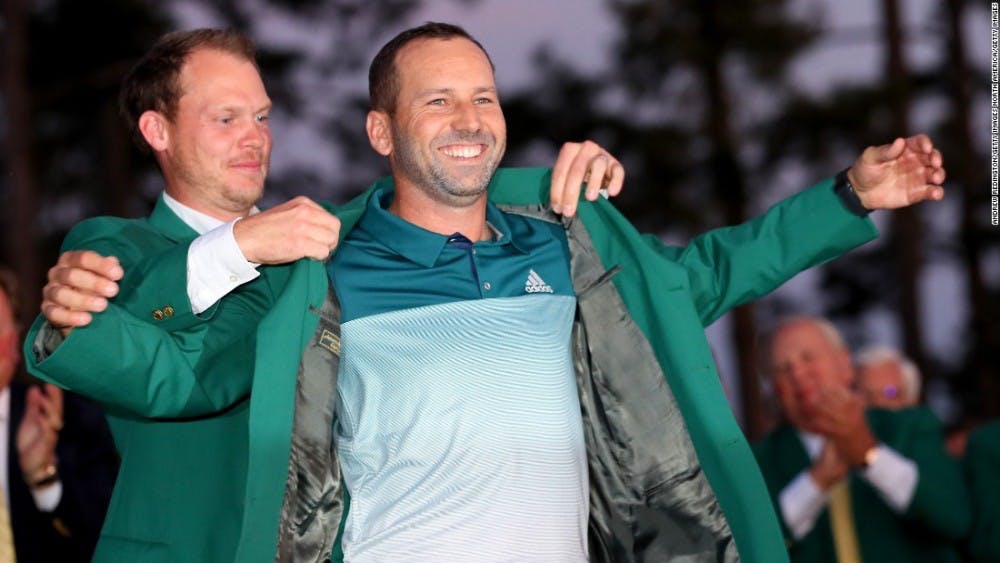 Sergio Garcia won the Masters this weekend. Photo via cnn.com.

Auburn, Ala. (EETV) – Over the weekend, a new golfer was awarded a green jacket and the title of Master’s Champion in Augusta, Georgia. Over the span of four days, beginning April 6 and ending April 9, this year’s Masters was no bore. Fans got to watch an ace, play-off and a first-time Masters winner.

There was something different this year throughout the tournament. This is the first Masters weekend in a long time without the great Arnold Palmer, who passed away last September. Buttons were passed out at the gates that had “Arnold’s Army” on it to honor the legend.

Sunday afternoon, Matt Kuchar made an ace at Hole 16. This was the first hole-in-one of this year’s tournament, but not the first at 16. Kuchar’s was the 19th ace in history at 16. The cup was in its traditional Sunday location, so this was not the first time Kuchar had faced it. After getting his ball out of the hole, Kuchar gave it to a young boy. He knew he was going to give the ball to that boy because of his “Sam Snead hat” he was wearing.

At the end of the fourth round, there was a tie for the No.1 spot between Justin Rose and Sergio Garcia. This meant a sudden death playoff that began on Hole 18. Rose hit his tee shot into the woods; Garcia hit his onto the fairway with a one-shot advantage. After getting to the green, Rose missed his putt for par and Garcia sunk a birdie, winning his first Major.

Garcia held the lead for most of the day with Rose just behind him. Spectators were worried Garcia was going to lose the tournament when he had to take a drop at 13, but he saved that hole with a par. With an eagle putt at 15, Garcia looked to have saved his round, and ultimately the green jacket.

Garcia is the third Spaniard to win the Masters.

Garcia described his win as “such a long time coming” and fans agree.

Here is the top ten finishers of the 2017 Masters: